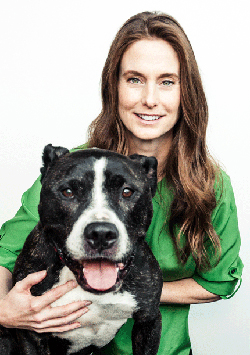 Aimee Gilbreath is the executive director of the Michelson Found Animals Foundation, a Los Angeles–based nonprofit focused on Saving Pets, Enriching Lives. Aimee joined Found Animals as its first full-time employee in March 2008 and has been responsible for launching the foundation’s wide range of innovative programs. Under her leadership, the foundation has grown to more than 70 staff members and nearly 600 active volunteers.

Nationally, the foundation provides affordable microchips and scanners to shelters and animal welfare organizations, along with a state-of-the-art universal registry. In Los Angeles, the foundation operates two retail adoption centers that adopt out thousands of shelter pets each year and offer training, grooming, daycare, premium food and treats, toys and just about anything else a pet needs. The foundation also hosts the annual Saving Pets Challenge crowd-funding competition and is active in animal welfare policy and education initiatives.

Prior to joining the Michelson Found Animals Foundation, Aimee was a principal with the Boston Consulting Group, where she led teams to solve complex business problems for Fortune 500 clients. She holds a B.S. in molecular biology from the University of Arizona and an M.B.A. from Stanford University. Aimee lives in Santa Monica, California, with her husband and their beloved pit bull, Rufus.