Executive director and founder of Paws for Life Utah (PFLU) 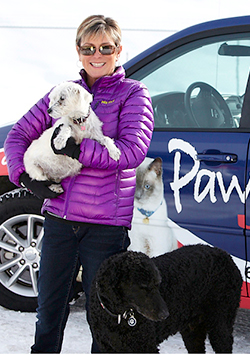 Cathy Boruch is the executive director and founder of Paws for Life Utah (PFLU). PFLU is a nonprofit, volunteer-run organization dedicated to helping homeless dogs, cats and other "at risk" animals from municipal shelters find forever homes.

A no-kill advocate, Cathy is a supporter of partnerships among animal shelters and rescue groups to bring no-kill to communities across the nation. Cathy has been a lifelong advocate of animal rescue and has worked with the challenges of large-scale metropolitan areas, as well as growing rural communities that have a critical need for animal rescue and rehabilitation.

She initially partnered with the Heber Valley animal shelter, which became no-kill in 2013. Their no-kill status received national attention when PFLU and Heber Valley Animal Services pulled the gas chamber out of the shelter and held a community "Bash the gas" event. Citizens took a sledgehammer to the gas chamber, smashing it to pieces. Since then, PFLU has expanded their reach throughout the state of Utah to rescue animals at risk and to assist other shelters in becoming no-kill.

Prior to founding Paws for Life Utah, Cathy worked for Amkor Technology as their senior vice president of global human resources. She also worked for Boeing Corporation for many years, holding various leadership positions. Cathy was a board member and vice president of development and endowment for the Arizona Humane Society. She was also an advisory board member for Friends of Animals Utah.

Cathy and her husband, John, reside in Heber City, Utah, with their two dogs, cat and three horses, and the many moose, deer and wildlife that frequently visit.