Chief veterinarian for the City of San Antonio 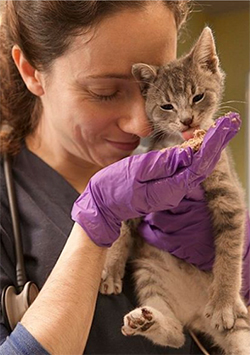 As the chief veterinarian for the City of San Antonio, Dr. Marilyn Gotbeter provides medical support and guidance for the city’s municipal shelter, which admits more than 30,000 animals per year. Her main focus is on overall shelter health and population management while providing individualized care to sick and injured pets. In her tenure with San Antonio Animal Care Services, Dr. Gotbeter has directed the establishment of hospitalization services for shelter pets to include emergency and critical care. She has grown the medical team to provide both specialized surgical services and HQHV spay and neuter services, performing 14,500 to 17,500 surgeries in-house for shelter pets per year.

In an ongoing effort to promote pet sterilization in the general community, Dr. Gotbeter has worked with the city’s spay/neuter clinics to establish partnerships that target neighborhoods in need. Her advocacy doesn’t stop at the clinic’s doors. She provides general oversight and support for the shelter’s community cat program, including an on-site feral cat colony. She also supports local law enforcement, including the department’s Cruelty Investigations Division, in their pursuit of animal abusers, by handling necropsies, attendant reports and expert trial testimony.

An integral team member of Animal Care Services, Dr. Gotbeter decided early on to focus on shelter medicine, and she found her home in animal control working as a contract veterinarian following her training in emergency and critical care. A graduate of Cornell University College of Veterinary Medicine, Dr. Gotbeter has helped lead the municipal shelter team, which has become nationally known for its innovative and progressive balance of animal care and control. Finally, she encourages teamwork and increased morale through her easy manner and professionalism with all staff levels.