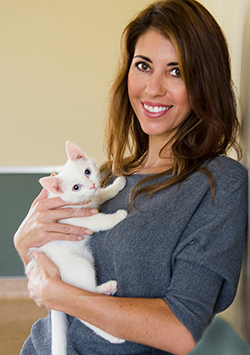 Dr. Shayda Ahkami is the director of shelter and veterinary services for the Palm Springs Animal Shelter (PSAS) in Palm Springs, California. PSAS is proud to be an open-admission shelter operating under the no-kill philosophy, the only one of its kind in the Coachella Valley. Dr. Ahkami has served on the board of directors for the Friends of the Palm Springs Animal Shelter since August 2013, demonstrating her unwavering commitment to the PSAS mission of saving lives and donating her skills and expertise in the surgery suite.

Dr. Ahkami continues to be a leader in the no-kill movement by acting as co-chair for the No Kill Coachella Valley Coalition. She also serves as a non-voting member of the Coachella Valley Animal Campus Commission, a group of city officials who contract with the local county shelter, as a representative for the no-kill model. Dr. Ahkami is a strong opponent of declawing, as she has seen the mutilation and adverse effects firsthand. She acts as director for the Coachella Valley Paw Project, a group of dedicated experts, led by Dr. Jennifer Conrad, who educate people about the cruel act of declawing with the hope of ending that practice.

Dr. Ahkami graduated from St. George University in Grenada, West Indies, and is currently pursuing her master’s degree in veterinary forensics through the University of Florida. Prior to earning her veterinary degree, she worked as a wildlife rehabilitator for 11 years at the Fund for Animals Wildlife Rehabilitation Center. During that time, she also worked intensively against the illegal exotic pet industry, another aspect of animal welfare that she strongly opposes. Dr. Ahkami holds memberships in the American Veterinary Medical Association, the Society of Animal Welfare Administrators, and the State Humane Association of California.