Social media coordinator/photographer for the Humane Society of Utah 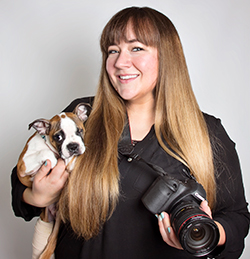 Her passion for animals is right up there with her love of photography. She probably couldn't tell you how many animals she brought home to her poor mum, but somehow her mother always accommodated and nurtured her daughter's love of animals in need. Guinnevere currently has three rescued dogs, a 33-year-old parrot and a turtle she’s had for 18 years.

Guinnevere has worked and volunteered with all sorts of animals, from dogs to horses to giant African millipedes and even emus. She studied photography, digital imaging and fine arts at the University of Utah. As a junior in college, she was encouraged by a fellow student to volunteer her time photographing homeless pets at the local humane society. She quickly fell in love with photographing shelter animals and her weekly volunteering efforts turned into a full-time career with the Humane Society of Utah.

She hopes that photographing shelter animals in unique ways will not only result in their adoption, but also encourage other shelters and rescue groups to do the same. She promotes these animals in a cheerful and positive manner and is always trying to come up with creative series to photograph shelter animals, including the viral photo booth series and black dog flower series.

To date, Guinnevere has photographed over 6,500 shelter animals, and her photos have been published in newspapers and magazines in the United States, England, Germany and Poland. She has photographed shelter dogs for commercial campaigns for Nestlé Purina PetCare and Pabst Blue Ribbon beer. Her first book, Shelter Dogs in a Photo Booth, which benefits animal rescue in Utah, is being released in May 2016.