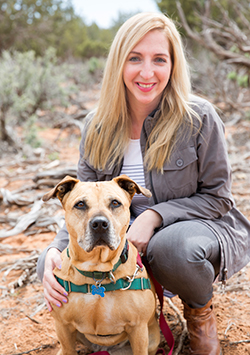 Jessie Earl is the manager of social media strategy at Best Friends Animal Society. She joined Best Friends in 2012 to lead the strategy that would ultimately grow the organization’s social media presence. Leading a team of community managers, Jessie has been able to help grow the organization’s online community by more than five times to date, with more joining online every day.

In 2015, Jessie shifted focus to partner with the larger digital team and further harness the power of the community she built by generating revenue from the organization’s social channels. She also oversees social advertising efforts across Facebook, Twitter, LinkedIn, Pinterest and Yelp. She loves dreaming up creative ways to build on Best Friends’ great content and digital relationships to spur action.

Jessie first connected with Best Friends a decade ago as a weekend adoption event volunteer in Salt Lake City. Prior to following her passion for animal welfare, Jessie was a freelance writer while also serving as a senior marketing specialist for Intermountain Healthcare, one of the nation’s largest nonprofit health-care systems. For four years, she oversaw production of print marketing materials, digital content, advertising campaigns, events and PR outreach for the system’s health plan. Earlier in her career, she held roles in public relations and publishing.

An Atlanta native, Jessie received a B.A. in communications from the College of Charleston in South Carolina. She now lives in metro Detroit with her two dogs, Jemma and Logan, her husband, Charlie, and her busy toddler (also a Charlie), who already counts animals among his best friends.