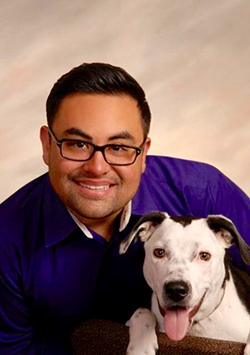 Tucson native José Ocaño started working for Pima Animal Care Center (PACC) as a shelter tech in 2006, when he was only 18 years old. After advancing to become the clinic’s lead technician, José was appointed to be the county facility’s first-ever rescue coordinator. In that role, he grew the shelter’s rescue program from five groups to the 50-plus groups that it still partners with today.

After leaving the center for two years to work for the SPCA of Central Florida as their volunteer manager, José returned to PACC as its first-ever volunteer coordinator. By hosting community walks, inviting the public to open houses and creating a culture of appreciation and fun, José grew the shelter’s volunteer force from about 100 people to 800.

After revitalizing PACC’s volunteer program, José was promoted to oversee the shelter and its medical clinic. In this role, he helped to launch PACC’s Community Cats Project, overhaul the shelter’s medical operations, and push the open-admission shelter’s live release rate from around 70 percent to the nearly 90 percent it is today. José was recently named executive director of operations, and he is co-directing the entire organization.