Director of Development and Marketing at Pima Animal Care Center 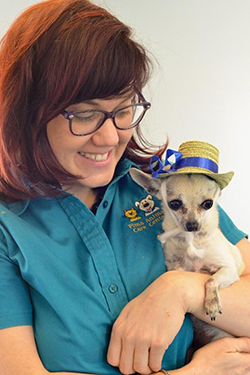 Karen Hollish is the director of development and marketing at Pima Animal Care Center. She was hired in March of 2014 to start the development program for the center, which is the government-run, open-admission animal shelter for Pima County, Arizona. At that time, the shelter took in nearly 24,000 pets each year, and it had a save rate of about 74 percent.

In less than two years, Karen’s one-woman program has raised more than $3.2 million to help the shelter, as well as an estimated $1 million in critical in-kind support. The investments Karen has cultivated have filled critical resource shortages. Her efforts have helped reduce the number of animals surrendered to the shelter, and they’ve helped catapult the organization’s save rate to 90 percent in 2015.

Before she caught the animal-welfare bug, Karen was a daily newspaper reporter in the Midwest. When she moved in 2011 to the U.S. Virgin Islands for a reporting job, she volunteered her marketing services (and her spare room for fostering kittens) for the Humane Society of St. Thomas. She realized she loved nothing more than hustling for media coverage to help the shelter’s pets. She soon changed career paths and has never looked back.