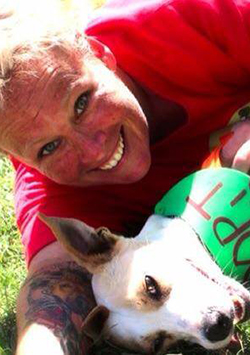 In 2009, Maureen Keenan, a lawyer, called to offer help to a young woman who had just rescued a pit bull who was thrown from a bridge into the Ohio River. That young woman, Kelsey Westbrook, was being threatened with eviction from her apartment because she brought home a pit bull. The result of that meeting was the birth of Saving Sunny, a dog rescue group created to honor the spirit, charisma and story of that spectacular red-nosed pit bull, Sunny. Since then, Maureen has handled all of the legal, financial and business components of the organization, as well as playing the role of chief behaviorist and co-strategist with Kelsey.

Most recently, Maureen’s (and Saving Sunny’s) focus has expanded to providing support to underserved communities in the form of resources needed for families to keep their pets in their homes and avoid surrender to local shelters. To that end, Maureen handles community outreach, dog behavior counseling and efforts to secure veterinary services for target community members.

In her free time, Maureen works at her paying job as the executive director of the Kentucky Nurses Association.