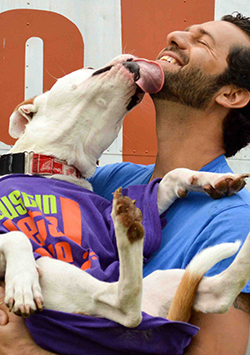 Mike Kaviani began working with shelter animals at the Irvine Animal Care Center (IACC) in California when he was 18. His 3rd Chance for Pets Program received national recognition when IACC was given the 2007 Shelter of the Year award primarily due to this program.

In 2010, Mike became the director of training and behavior at the Southampton Animal Shelter Foundation (SASF). At SASF, he worked under the guidance of Aimee Sadler (founder and CEO of Dogs Playing for Life), and together their work resulted in the shelter consistently reaching one of the highest save rates in the country. Mike has been a Dogs Playing for Life team member and part of the program’s development throughout his work with Aimee. Mike is a DPFL lead instructor and assists with seminars and provides mentorships.