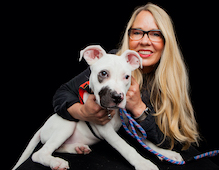 Julie Castle was born and raised in Bountiful, Utah, a descendent of pioneers and entrepreneurs. Following magna cum laude graduation from Southern Utah University, Julie was headed for law school when she happened to stop by Best Friends while on vacation. The sanctuary, the no-kill ethic and the vision of the founders had a profound effect on her and inspired her to trade her lawyerly ambitions for a low-paying job as employee number 17 at Best Friends. As the organization grew, in 2000, Julie went on to lead No More Homeless Pets in Utah, a statewide no-kill coalition led by Best Friends comprising 166 rescue organizations, animal control agencies and veterinarians. During her six-year tenure, shelter deaths were reduced by 50% statewide and Utah now has more no-kill communities than any other state in the country. Julie took on leadership of the organization’s fundraising efforts in 2014 and in subsequent years, fundraising grew by 48% to $130 million and membership grew by 30%. Over the years, Julie has championed the concept of organizations and municipalities joining forces to tackle the killing of dogs and cats in shelters. She organized the design, groundwork and coalition-building for NKLA (No-Kill Los Angeles), an initiative that brought together the city of L.A. and more than 130 organizations. Launched in 2012, NKLA led L.A. from a save rate of 56% to 87% by the end of 2017. In 2016, Julie put a stake in the ground on behalf of Best Friends to take the entire country to no-kill by 2025. The NKLA initiative and Utah coalition are serving as groundbreaking and sustainable models for Best Friends’ lifesaving efforts. In 2017, Julie was appointed to the position of Best Friends CEO, the first woman to lead a major national animal welfare organization. In 2018, she was celebrated by InStyle magazine as one of 50 Badass Women “who show up, speak up and get things done,” and in January 2019, she was selected by TheEveryGirl.com as one of “18 Women Who Inspired Us in 2018.” Recognized as a leader and voice of the national no-kill movement, Julie lives with her husband, Gregory, in Utah, where they run marathons and hike in southern Utah's red-rock wilderness. Julie also enjoys restoring historic homes, is an avid gardener and owns a pizza joint in Kanab, Utah.