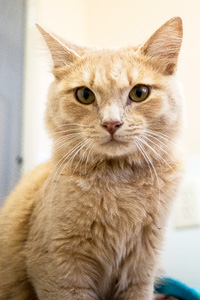 It appears that Jordy developed some gastrointestinal symptoms ― specifically vomiting, some diarrhea, lethargy and loss of appetite. We were initially concerned that he may have been blocked up with stool, but on exam we found that his colon was pretty empty. He also had a fever which was unusual.

We ran blood work, which was normal, and took some radiographs. Blood work was normal and radiographs also looked pretty good. Since he was having diarrhea, we took him off his stool softeners and also the medicine to help his colon contract. We also provided supportive care in the way of fluids under the skin, syringe feedings, an appetite stimulant and close monitoring.

Over a week or so Jordy slowly improved and was more his lively self ― playing and eating better, while the vomiting and diarrhea resolved as well. We slowly put him back on his stool softeners. Depending on how he does he may or may not need these long term.

Our suspicion was that Jordy maybe picked up a virus that caused enteritis (inflammation or infection of his intestines), or perhaps had some bacterial overgrowth in his bowel. Either way we are happy that he is feeling much better and Jordy is glad that is all behind him now. He has to make up for some serious loss of kitten mischief and trouble-making.