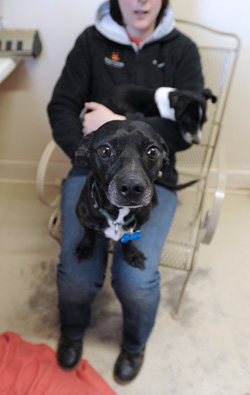 Well since our last update on Katelyn, she has experienced many firsts since coming here to Best Friends. For starters, she experienced her first dog intro here at the Clubhouse, an area of Dogtown. Buddy Valentine (pictured left) came to us as an owner surrender from a nearby St. George shelter, and when we first met him, we just knew he would be a perfect fit to live with Katelyn in our kitchen. The intro was a little rocky at first, as Katelyn initially growled at Buddy the first time he got right in her face. However, Buddy listened very well to Katelyn's displeasure and backed away. A few moments later, they sniffed each other happily, and they have been a match made in heaven ever since. During each of Katelyn's feedings while she is being held, Buddy happily jumps up onto whomever is holding Katelyn in their lap, and the two dogs snuggle soundly together. Every night before I leave, the two can be found cuddling in one of the beds we have for them in the kitchen.

Katelyn's second first came in the form of a golf cart ride. It's no surprise here at Best Friends that many of our dogs love to go for golf cart rides. Katelyn is no exception. She is wonderful on car rides, so one day I decided to try her on the golf cart. She had an absolute blast. As I carried her to the golf cart, her tail began to wag energetically. I sat in the driver seat, with Katelyn on my lap with her paws on the steering wheel, and we began driving. Katelyn had the cutest expression on her face that I have ever seen on a dog. Her ears were flapping in the wind, like windsocks, as we drove. Katelyn was peering over the steering wheel the entire way. She definitely seemed to enjoy herself, which was proven at the end of our trip. As I took Katelyn back to the kitchen and set her down, she began to bark at me and wiggle all around. So I opened the kitchen door to let her follow me out of the kitchen into the center of the octagon. When I did this, Katelyn ran right over to the entrance door of the octagon, and began barking and pawing at the door. Needless to say, we ended up going for another golf cart ride that day. Katelyn and I both enjoyed every moment of it. 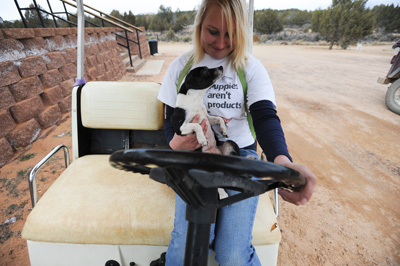