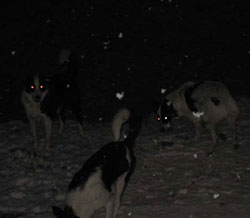 Thought you two might be wondering what antics Kunzite has been up to lately. We, too, got a lot of snow and the dogs loved it. Of course our snow is short lived and we are now left with lots of puddles for her to splash through.

All in all she is much better at heeling than before. She's not much for waiting to be released when off leash and always gets sent 'back' to sit by Jasper and Lizzy. It's getting down to only about 2-3 times of being sent back which is much improved from days of 5-6! She is also eating less things that she finds along the way! Her biggest accomplishment is earning out of kennel privileges during the day while I'm at work. So far, nothing destroyed and no accidents!! 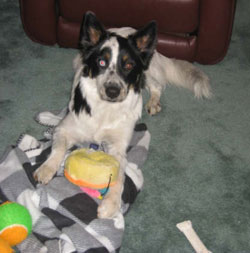 She has moved up to adult dog food like Jasper and Lizzy, but I've had to increase her to nearly 3 cups a day as she started to get kind of skinny. I could really feel her ribs and pelvic bones. Maybe I need to go back to puppy food. I hope Miles is surprised by all of her 'growing up' while he was away. He tells me not to put it that way!

Tonight I watched her with Patton for about 5 minutes before Patton finally jumped up on the dresser. She's really very gentle, taking care not to bite at Patton, but 'noses' at him, bows and keeps him cornered. Patton makes a lot of noise during these encounters which makes them seem much worse than they actually are. Every time I try to get the camera, Kunzie follows me, so not much luck with capturing this on film. 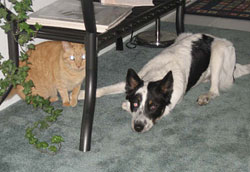 She's still very much a cuddler and the biggest lap dog I have ever seen. Too bad no one is here to take a picture, as at least once a night she climbs up into my lap while I'm on the computer, puts her front paws up on my shoulders and tries to lick my face! She still sleeps practically on top of me at night. Can't imagine life without her.

I've rambled on enough! Hope all is well with you both!