Rad gets a sister 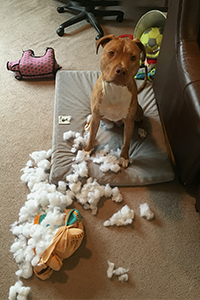 We have had a lot of changes since our last update.

First, Radar has started agility classes and is loving it. He has increased confidence in class and such focus. Since he is deaf, he goes through the course by just paying attention to me and the hand signals I give him. We just started our second six-week course. In the most recent class Radar was actually the only one in class that successfully completed one of the courses. I am so glad I have found something he loves to do with a skilled trainer who understands him well.

The second big change is more of an addition. On the Fourth of July my family, Radar, and I met a dog at a local pound. On July 7 she was officially adopted into our family. Her name is Liberty (Libby) and she is a two-year-old pit mix. She is smaller than Radar — 45 pounds compared to his 65 pounds. They have both adjusted so well and I am so proud of them, especially Radar.  Being a single dog for three years, I was worried how he would handle such a big adjustment, but he has been such a good brother. They have been having a fun summer between playing with each other, hanging out at a local beach (they aren't swimmers, they only enjoy wading in the water), and exploring different hiking trails.

Radar has been enjoying his sunbathing on our deck, but I am personally looking forward to fall and some cooler weather. Hope everyone has a great end of the summer and holiday season!