Prince is growing like a weed. We weighed him today and he’s at 58 pounds. His bum is starting to fill in and get some muscles, and his overall physique is plumped up so that he looks a lot less like a scrawny newborn. The mineral oil addition to his milk (mentioned in the previous journal) continues to prevent any constipation — so we’re still enema free. Woo-hoo! 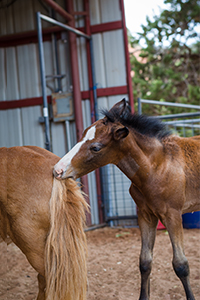 Uncle Feather has turned out to be just the perfect companion for Prince. They’re especially cute at night when Feather is either standing guard over Prince as he sleeps or actually lying down right next to him. It’s pretty adorable. Prince is trying to play with Feather now, and Feather is really patient with all of his annoying baby antics. And just like a good Uncle, Feather is sure to draw the line and let Prince know he’s gone too far and needs to back off. It’s so vital for little foals to learn these social rules early in life.

And just like Uncle Feather is teaching Prince appropriate horse manners, we need to make sure that we’re teaching him appropriate manners with humans. Every interaction we have with him is a learning opportunity, and it’s a big responsibility for us to make sure we don’t let him turn into a monster. We’ll talk a little bit more about this in his next update.