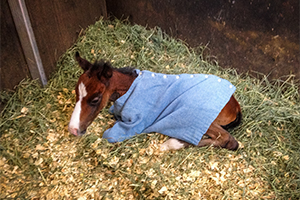 This is the picture emailed to me by Sena at the McKinley County Humane Society (one of the Best Friends network partners in Gallup, New Mexico) when she asked if Best Friends might be able to help a little week-old orphaned foal named Prince. No fair! He’s wearing a cardigan! How could I possibly say no to him! Well, obviously it worked, because Prince has joined the herd here at Horse Haven.

Prince arrived when he was 10 days old. His mom had been impounded as a stray and eventually made her way to the McKinley County Humane Society. Not too long after her rescue, she foaled and brought Prince into the world. Unfortunately, Prince wasn’t strong enough to stand and get over to mom to nurse all on his own. And mom was wild enough that she wasn’t about to let humans get near her, even if they were only trying to help her baby get over and nurse. It quickly became clear that they needed to intervene to save Prince, so they took him on as an orphan.

Raising an orphaned foal is no small undertaking. The first thing they did was to get him to a vet. As luck would have it, there was another mare at the vet’s office that had foaled so the vet was able to milk her and get some colostrum for little Prince. Colostrum is vital to jump-start newborn foals’ immune systems. Without it, they really don’t have any immune protection and are susceptible to every infectious disease that may come their way. Mares produce colostrum in their milk for a very short time after birth, so it was really fortuitous for Prince that he was able to get some at the vet’s office, since he wasn’t able to get any from his mom.

Another thing that was vital for Prince’s survival was getting his umbilical stump treated to prevent infection from entering the umbilicus. Until the umbilicus closes, it’s like an open door for bacteria to enter, and an umbilical infection (commonly called “navel ill” or “navel ail”) can often be deadly.

So Prince was very lucky to be born at McKinley County Humane Society, where they were able to immediately address his neonatal needs and give him a fighting chance of survival. The next thing they did was to call Best Friends (and send me this adorable picture) because we have a few more resources available to take him through the next stage of his life.

Prince arrived at Horse Haven when he was 10 days old. He handled the transport really well and the folks from McKinley County Humane Society gave him plenty of milk breaks along the drive. At this age, he is drinking about every two hours or so around the clock. Initially they tried to get him to drink out of a bottle and nipple, but Prince refused and instead preferred to drink his milk right out of a bowl like a big kid. That’s actually great! The bowl is so much easier for us. We just have to be careful to not fill it too full at one time, as he likes to stick his whole muzzle in and blow bubbles. That’s pretty cute, but also pretty dangerous as he could inhale some milk and get some respiratory problems like pneumonia.

There are commercial milk formulas available in stores for little orphans, but Prince declined those and chose raw goat’s milk as his beverage of choice. Conveniently, we have access to raw goat’s milk so we can give him what he wants. And it’s actually a really great option for orphaned foals. One downside to the goat’s milk is that it’s a little richer than mare’s milk and can cause some constipation, so we have to monitor him closely to make sure he’s pooping easily and doesn’t get blocked up. If things don’t seems to be moving as they should, an enema will help free him out.

When preparing for Prince’s arrival, I set up a few specific things. It’s still down in the 30s and 40s here overnight so I wanted to be sure that he was going to be warm enough. That was easily solved by placing three heat lamps with red bulbs in one corner of the stall where he could get into the heat and out of the wind. And in case the heat lamps weren’t enough, I also pulled out or foal blankets to have handy if needed.

Another was to give him a nice soft bed of shavings under the heat lamp. He doesn’t need to have the entire stall bedded down with shavings. Just a nice soft spot under the heat so he won’t get sores on his joints from the hard stall floor. Foals will also sometimes snuggle up with a large stuffed animal, so Dogtown was kind enough to loan us a large stuffed gorilla. What foal doesn’t need his own gorilla, right?

One thing that is a necessary source of comfort, safety, play and mentorship for foals are other horses. When thinking about who would be a good roommate for Prince, I kept a couple of things in mind. Will the horse be OK with a young foal and not hurt him? Will the horse be good at teaching him appropriate horse skills? Will the horse be OK living in a smaller space with Prince for the next several weeks?

Nobody here at the Sanctuary fit those criteria, but as luck would have it, our trainer, Ann, has a miniature gelding named Feather who checked off every box on my wish list. Ann was willing to let him come and foal-sit for a while. Unfortunately, due to some heavy rain and the resulting impassable roads, Feather wasn’t able to be here for Prince’s arrival; but hopefully the road will be dry enough to bring him over in the next day or two.

So Prince is here now. Let the around-the-clock feedings begin!