Prince is full of surprises.

Ann’s been writing some great journals the past several weeks about Prince’s training, but I thought I’d update everyone on how everything else is going for Prince. A lot has changed with our growing young guy. He’s been gradually cut back from his every-two-hour goat’s milk feeding (thank goodness) and now he gets just four bowls of milk a day.  He’s eating hay now like a big horse and continues to grow like a weed. We gave up weighing him once he reached 200 pounds, and I imagine he’s probably close to 300 pounds by now.  He’s still small for a four-and-a-half-month-old foal, but his mom was pony-sized so that isn’t surprising.

One thing that’s become evident is that he’s going to be a gray horse once he’s full grown. When he arrived he was a solid little bay (a brown body with black mane, tail and legs). After he’d been here a few weeks, we started to notice a couple of little white hairs appearing around his eyes. Now he’s got gray hairs coming in all over his body and he gets a little greyer every day it seems.  This is normal for horses, so there isn’t anything wrong with Prince. 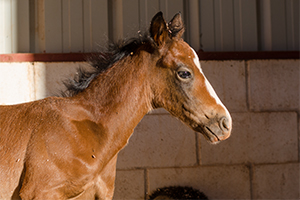 In photo above Prince is a bay 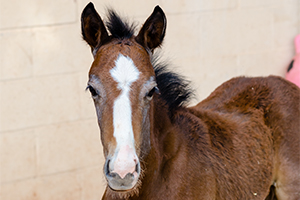 In this photo you can see Prince's face is getting gray

And just a little horse trivia for you: gray horses have white hair. So why are the called gray instead of white? A gray horse starts out a dark color (usually black, chestnut or bay) just like our Prince did, and as they age the hair loses its pigmentation and starts to come in white. The difference is that the skin remains dark gray under the white hair. (For horses to be truly white, they will have pink skin under their white hair.) We can’t predict just how long it will take him to turn completely gray, but when he’s done his whole body and even his mane and tail will have turned.

All in all, we couldn’t be happier with Prince’s health and continued growth.