Wait over there, grumpy face! 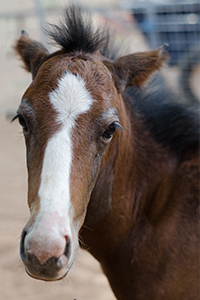 One of the many cool things about horses is that they are a precocial species. This means that they are born with fully functioning senses and are full-faculty learners from birth. In the wild, they need to be able to get up and move away from the placenta, the smell of which will draw predators within an hour of their birth. They’re so precocious that they can run up to three miles as one-hour-old babies! I find that pretty amazing. What this also means is that they are super learners, which is the good news and also the bad news, depending on the kind of handling and training they receive.

Over the years, we have taken in several horses who had been raised in such a way that they ended up being quite dangerous to people. And then they lost their homes because their people were afraid of them. Of course, no one creates these problems intentionally, but what tends to happen is that people don’t understand how to recognize the early signs of trouble and/or they think like a human instead of a horse and ignore these small signs until they become a much bigger problem. So with Prince, we really need to pay attention to the little things. You’ve heard the saying: Don’t sweat the small stuff? Well with horses, if we do sweat the small stuff, we’ll never have big stuff to worry about.

One of the things that’s been an issue with Prince is that he pins his ears and acts quite dominant when we come in to feed him his milk. He crowds the gate and gives us a very grumpy face. It’s quite normal behavior. In fact, it’s central to a horse’s social life to vie for dominance over food and water, and that’s what’s going on in his mind. He’s saying, “Hand over that milk and no one will get hurt!” And we do hand over the milk, every single time, so in his mind, he thinks he’s the mighty boss horse over all the milk bringers.

It’s a bit of an interesting dilemma because with an adult horse, we could manage this easily by not allowing the horse to approach the food until there is an improvement in demeanor, but in Prince’s case, we have to hold his bowl while he drinks. So, what we’ve decided to do is to not allow him to approach the gate as we are coming in ― which has the side benefit of us not having to try to manage a gate, a full pail of milk, plus the bowl to pour it into, plus having to defend ourselves against a pushy little foal all at the same time. And then, we decided that the best way to circumvent him pushing us around is to send him to a feeding station and have him wait there for his food so that we approach him instead of allow him to approach us (aka: push us around). There’s a pink ball on a rope that is hanging from the wall in his enclosure ― a very obvious point of reference ― and that’s where we send him. So far, it’s helping quite a bit,and he has been very quick to catch onto that plan. (Yay Prince!)

Every time we’re with Prince, we’re teaching him something whether we realize it or not and whether we intend to or not. And I’m bound and determined to proactively teach him to be a confident, happy, respectful little citizen.