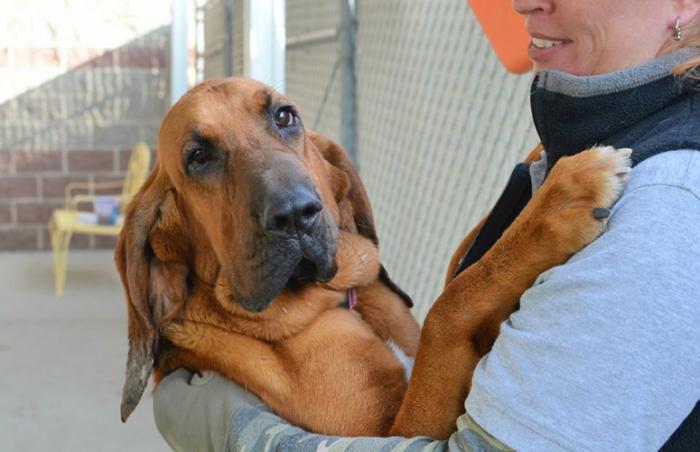 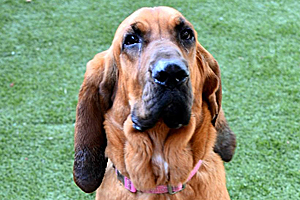 No one saw it happen. On a cold winter night, someone led Ellie May up to the front of the Salt Lake County Animal Services (SLCoAS) shelter, tied her up and left her there. The big bloodhound, with her giant velvet ears and extra-large wrinkles, sat outside the shelter waiting until staff began to arrive for work the next morning. There was no note of explanation — just Ellie May, who for some unknown reason was unwanted.

Shelter staff brought her inside and found out quickly that she was not only a young, healthy purebred dog, but she was an amazingly good girl. She knew how to sit and shake hands on cue, and she was attentive to her handler even outside, where distracting smells abound. She didn’t deserve to be abandoned on a winter night, but she did deserve a chance at finding a great new home.

After Ellie May was spayed, vaccinated and given a clean bill of health, she was off to the Best Friends Pet Adoption Center in Salt Lake City. The center partners with area municipal shelters to help pets find homes.

Falling in love with another bloodhound

Not long after Ellie May arrived, Holly Albrecht stopped by the adoption center, because she’d heard that’s where she might find the perfect dog. In 2012, Holly’s family had lost their beloved bloodhound, a dog who left such an indelible mark on the family that they knew when they were ready for another dog, it would be another bloodhound.

Holly wasn’t sure where the next dog would come from, but she knew she wouldn’t purchase one. “We had been keeping our eyes open for the right dog for a year,” says Holly. “We don’t believe in using puppy mills or buying dogs from breeders, and we knew that eventually the right dog would come along.”

When Holly met the recently abandoned Ellie May, she knew the right dog had indeed come along. Holly filled out adoption paperwork on the spot, and Ellie May was on her way home, less than two weeks after she’d been tethered in front of the shelter.

So Ellie May will be going to dog training school to acquire some skills, but the family isn’t putting any preconceived expectations on the happy-go-lucky dog. “Ellie May has her own wonderful personality and we don’t expect her to be anything but her sweet self,” says Holly. 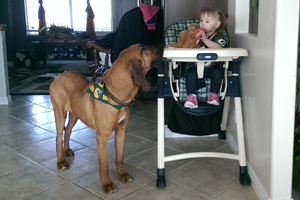 Ellie May didn’t have to try too hard to find her new BFF either, because there’s another one-and-a-half year old in the Albrecht residence — Holly’s granddaughter, Caidence. Under careful adult supervision, Caidence’s favorite new activity is feeding Ellie May treats. The giant of a dog gently takes treats from the tiny girl’s hand, to the delight of all involved.

The big dog and the little girl also love snuggling. Ellie May likes to rest her head (and then her whole body) on her people’s laps. The whole family is smitten with the irresistibly good-natured dog. Ellie May and her new human sister are made for each other, and Holly is thrilled she’ll get to watch them grow up and discover the world together.

To help more animals like Ellie May go from homeless to home, become a Best Friends member.