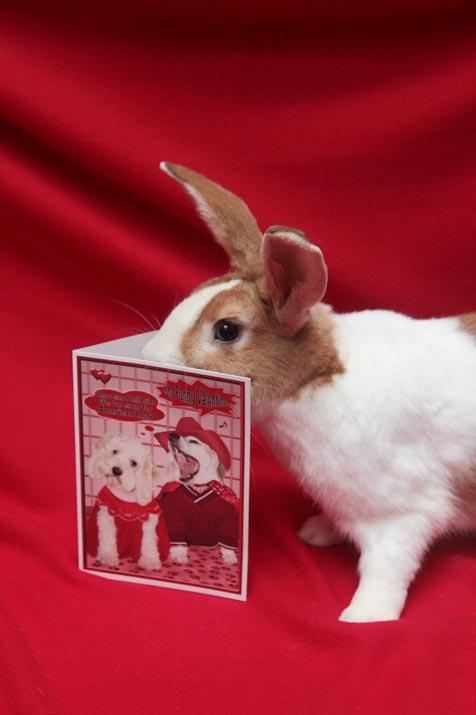 The poor guy had been abandoned in the middle of nowhere. That’s a surefire recipe for disaster. Domestic rabbits are not built for survival in the great wide open. Food is scarce — especially in the winter, when he was found — and they don’t have a chance defending against, or escaping most predators.

Then there are the vehicles to deal with. Paddy was first spotted running alongside a major highway. In that first sighting, the person who saw him thought he was a Jack Russell terrier boogying on down the road. When further inspection revealed him to be a rabbit, the lady contacted some rabbit rescuers who managed to trap him after several days of trying. Thank goodness he wasn’t hurt before they could catch him!

He came to Best Friends where he’s been adjusting to a whole new life — a life of tasty food, cozy beds, and human contact. Though Paddy likes the food and other perks just fine, it’s taken a little longer for him to get used to people. Still, he’s already made great progress. When his caregivers bring him breakfast, Paddy has decided that’s one time of the day when he wants to be petted. He used to be completely nervous around people, and now he’s starting to gain confidence.

Well, the staffers have decided to do something special for Paddy. Not only is this his first Valentine’s Day, but February also happens to be National Adopt a Rescued Rabbit month. Paddy couldn’t have come to the sanctuary in a better time to be spoiled!

Rabbit dreaming of being adopted

A home would be the absolute best present he could hope for (any takers?!), but in the meantime his caregivers have set up a special Valentine’s Day box — just like school kids do — for Paddy. So, send him a card: Attention: Paddy at The Rabbit Department of Best Friends. No worries if they come a little late, either. He won’t mind! His caregivers want to make sure he knows full well people are going to love him from here on out.

Of course Paddy is only one rabbit among many trying to find a forever home. Debby Widolf, rabbit manager at the sanctuary, always encourages visitors to help out where they can in their own neighborhoods.

"Spread the word about National Adopt a Rescued Rabbit month," Debby suggests. "Make posters, and volunteer at your local shelter." In addition, one of the best things Debby says you can do for rabbits (during February or any other month) is to search online for rabbit rescue groups close to home. You might be surprised how many are near you, and they will always appreciate a helping hand.

And as for Paddy, he’d certainly appreciate a few surprises in his Valentines box.