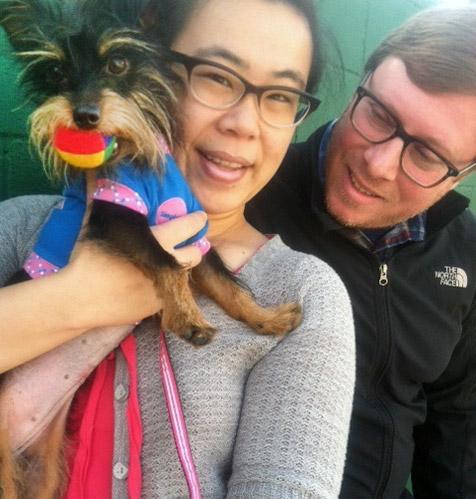 Each Friday, a dog or cat rescued by Best Friends Los Angeles programs goes on FOX’s "Good Day LA" on its adopt-a-pet segment. Then, once a month, dogs and cats appear on "Access Hollywood," where they’re often introduced to TV audiences by Best Friends’ Acclaimed Ambassadors, including actress Denise Richards and TV personal trainer Jillian Michaels.

Lights, camera … then what? Adoption!

But what happens after the lights and camera go off and the show is over? Jf (pronounced "Jeff") Pryor, Best Friends mobile adoption coordinator in Los Angeles, is happy to report that many of the animals are adopted after they’re seen on the show, some even by the next day.

Take Clarice, a German shepherd and Shiba Inu mix. Now named Kazi, she was quickly adopted and now lives with canine companions, Kaylee and big Sammy, and her new people, Alan and Cathy.

And Lou Who, a six-year-old Yorkshire terrier mix found by animal control while she was wandering alone on a street, was cared for by Best Friends staffers until she, too, appeared on TV. As a result, Lou Who — renamed Lulu — found her new home after her adopters Candice and James saw her on TV.

The TV segments, Jf says, are "brilliant, unique opportunities to shine a brighter light on a chosen dog or cat. The impact of a minute or two of these beautiful kids peering directly into the camera to a new audience is not lost on me."

Jf uses Ribbon as an example of a dog who landed in a good home as soon as he was showcased on TV. "He and I went on FOX on Friday morning," Jf says, "and on Saturday, a contact had been made with a right-fit home, and by early the next week, Ribbon had new love, a new sister, and a new last name."

It also happened that way for Elf, a dog with elf-like ears, who went on stage on "Good Day LA" with Jf and Best Friends staffer Nora Della Maddalena. Elf was adopted the next day, too. "The ears did it," Jf insists.

From the TV screen to a home

A viewer’s heartstrings are pulled enough to take that next step and adopt for various reasons. No matter the draw, the animals are in homes and happier because of it.

"It is incredibly gratifying to see these beautiful animals find loving homes as a result of their appearance on the FOX 11 TV adopt-a-pet segment," says Nora, who has appeared on TV with some of the animals. "All the people at ‘Good Day LA’ have been so generous in providing a spotlight for animals in need of good homes, and we are so grateful."

Thanks to those TV spots, "we really do get by with a little help from our friends," Jf adds.

Best Friends Animal Society develops programs both nationally and locally in many areas of animal welfare. From low-cost spay/neuter programs to mobile adoptions events, we're tirelessly working to create a nation with No More Homeless Pets.