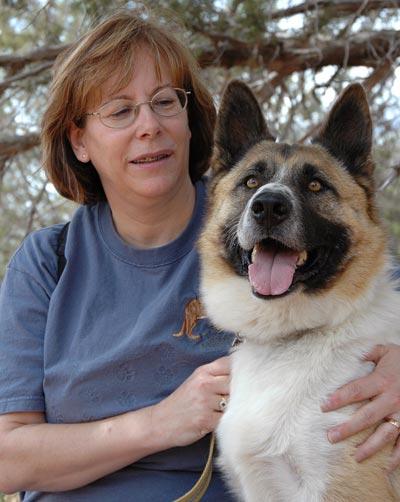 Adopting dog with challenges pays off

Debbie Beckler of Stockton, California, decided Newman the dog was worth the work, even if he didn’t appear to be the perfect dog to go into a home with cats and a cranky older dog.

"I don’t know what it was about Newman but I fell in love with his picture the minute I saw it – it’s nothing I can explain! The cutest thing he does is cock his head when I’m talking to him. It’s like he’s really listening," Debbie said.

Dog with a challenging history

Newman needed a little bit of magic. He lost his home when he bit a little boy who was throwing rocks at him. Newman was scheduled for euthanasia before being accepted at Best Friends. He was here well over a year before Debbie saw his photo.

But since Debbie and her husband, Jon, have seven cats, the dog adoption crew had him tested to see how he did with cats. Newman didn’t do so well, but Debbie couldn’t forget his eyes. She and Jon talked it over and asked if Newman could be tested again.

This time, Best Friends dog trainer Pat Whitacre focused on using positive reinforcement when Newman ignored the cat and giving him "boring time-outs" if he showed too much interest in the cat. This smart dog, who is so eager to please, quickly figured out what was expected of him.

With Pat’s help, Debbie and Jon devised a plan to safely introduce the animals to each other and to build the relationships between Newman and the cats. When they aren’t there to supervise, they keep the cats and Newman separate.

How to introduce a dog to a cat

The Becklers also have two dogs, one of whom is old, deaf, "slightly senile" – and used to being the alpha dog. Newman is also an alpha dog, so Pat worked out a plan to get the dogs used to each other.

The hard work over the last few weeks has paid off. While Newman and the old dog still have a prickly relationship, it is getting better. The other dog and Newman just ignore each other, which seems to suit both of them.

The big surprise has been Newman’s relationship with the cats. They have all met Newman without incident. One of them has even taken Newman on as her project. Debbie said, "She rubs up on Newman and falls down in front of him, and Newman really seems to enjoy her attention."