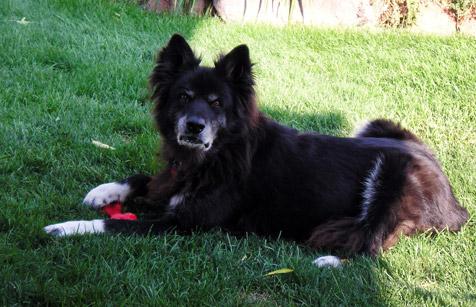 No doubt about it, Akila is a stunning looker of a dog. During the 11 years she lived at Best Friends, those fancy looks generated a fair amount of adoption interest. Each time, however, that interest faded once people learned Akila was so shy she didn’t even want to be petted. Not everybody is ready to love a dog at arm’s distance.

Akila’s waiting finally paid off when a family came along who understood they may never get to snuggle with her on the couch. Most important to this family was to make sure she had a couch all her own in the first place.

Loving a dog at first sight

Stacey Chappell of Salt Lake City, Utah, saw Akila for the first time in Best Friends magazine. Her interest piqued instantly. She showed the story to her husband, Bret, who at first said no, but within an hour started warming up to the idea.

The Chappells had just lost an older dog, and were looking to adopt another senior. As they researched more about Akila, their determination to meet her increased, even though they were aware of how shy this beautiful girl is. Bret and Stacey planned a trip to Best Friends.

They first laid eyes on Akila as she was walking down the hall with a caregiver toward the room where they were waiting. "My husband just gasped. He thought she was so beautiful," Stacey says.

The difference between this meet-and-greet and others Akila had in the past is that the Chappells didn’t lose interest once Akila wanted nothing to do with them. "It didn’t matter what she was like, I was bringing her home," explains Stacey.

The Chappells adopted Akila 10 months ago. While it hasn’t all been roses since then, they wouldn’t change a thing. They love her dearly. Akila, meanwhile, is deliriously happy in her own home. As a bonus, she’s also made progress in several different areas.

"She will, in very controlled situations, let me pet her," says Stacey. For example, one such controlled situation is Akila’s brushing sessions. Stacey first hooks Akila on a leash, then brushes her in a special part of the house on Akila’s favorite blanket.

Akila responds well to the structure. Of course, it helps that treats are involved. "Every time I clean out the brush, I give her a piece of chicken," Stacey says.

Read tips for helping a new dog settle into your home

A dog who loves agility and games

In other areas, Akila has blossomed even more. She responds really well to training. "She does old dog backyard agility," Stacey explains. This involves everything from targeting to standing on a pedestal and walking on ramps. Funny detail there, too. Akila has taken to the agility training so much that she now pushes off the other two dogs — whom she loves playing with day in and day out — whenever they try to climb on the stuff.

A high-energy girl despite her advanced age, Akila loves chasing her new family members around the yard. She gets excited whenever she suspects it’s game time. "She loves to be interacted with," Stacey says. "Not touched, but interacted with."

In the end, the road hasn’t always been easy, yet the Chappells insist it’s worth it. "The greatest reward of having Akila is seeing her being relaxed, curious, playful and joyful," Stacey says. "She communicates with us and is bonded with us." In other words, Bret and Stacey found out what those who knew Akila best realized all along: She’s beautiful inside and out.