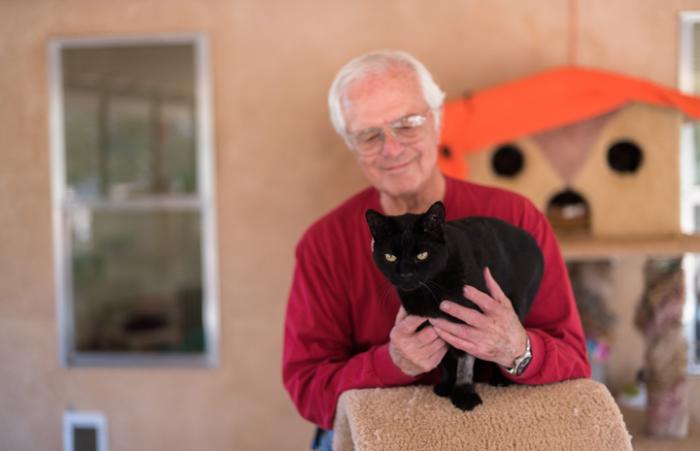 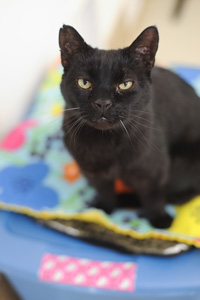 From his cozy perch on a cat tree, Alexander opened his green-gold eyes and watched Thurman and Mary Worthington walk into his room at Best Friends. Then, the nine-year-old black cat leaped down and raced over to the couple as if they were long-lost friends.

Alexander stopped inches away from the Worthingtons and lengthened his sleek black body into the kind of cat stretch yoga students are always trying to perfect. Next, he reached out and began kneading Mary’s sneakers. Mary bent down, scooped him up and gently petted his head as he nuzzled it into her arm and wrapped his paws around her in a snuggle-hug.

With that kind of personality, you might think Alexander would have gotten adopted a long time ago, but you would be wrong.

In fact, it was the Worthingtons who changed life for Alexander, seven months after he arrived at Best Friends. The Virginia couple might have experienced a touch of déjà vu when they met him, and that made all the difference in his world.

Worth the wait for a special senior cat

A senior black cat, Alexander came from a home with many other cats, and after that, he seemed to decide that he’d prefer to be the only cat in the household. While Alexander tolerates other felines, including his roommates at Cat World, he doesn’t like them all that much. He’ll leave them alone if they respect his personal space, but if they come too close, he can be downright ornery. He’s even been known to start a fight if other cats don’t take the hint and back off.

So, Alexander’s ideal home is one where he can rule the roost, but single-cat homes can be hard to find. After all, most families feel that if one cat is a fun addition to the household, two or more is just that much better. And that’s great, except it means that cats like Alexander might have to wait longer for a family happy to call him their one and only. But an older black cat who wants to be the only feline turned out to be exactly what the Worthingtons were looking for.

Seven years ago, Thurman and Mary visited the Sanctuary and returned home with Cooper (later respelled Coopurr), a senior black cat who’d come from a home with too many cats and liked being the only cat in the house. Sound familiar?

Coopurr lived happily with the Worthingtons until he passed away a little over a year ago. Then, in late October, Thurman and Mary thought it was finally the right time to bring another cat into their lives, and that’s how they found themselves getting a hug from Alexander.

The Worthingtons met many cats in Cat World to make sure they were choosing the right one, but they kept going back to Alexander. “We loved his personality,” Thurman says. “He’s a cool little cat.” Mary adds, “He has a little bit of an attitude and we like it.” And they have a soft spot for black cats.

Though his options for a home might have been limited, to the Worthingtons, Alexander was a shoo-in. 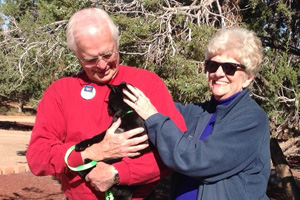 Right where he belongs

Alexander got to know the Worthingtons while they volunteered in Cat World. And although they were busy cleaning rooms and doing laundry, he remained the center of their attention. The couple took him outdoors for walks and stroller rides, and spent plenty of time cuddling with him. It was just a glimpse of what Alexander’s new life would be like.

As soon as he arrived in Virginia Beach in early November, Alexander crawled into Mary’s arms. Now he’s right where he belongs, getting the gift of a home of his own, just in time for the holidays.