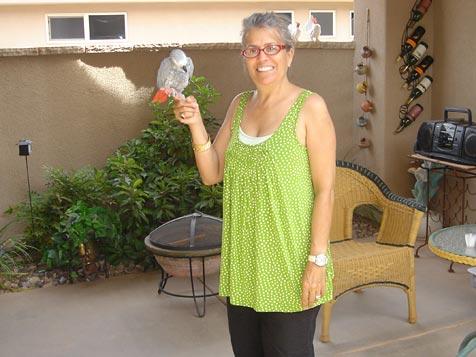 It’s not uncommon to hear a sing-song voice croon "Awwww!" when people meet animals for the first time. There is something about a cute animal that draws that response. On the other hand, when it’s the animal making that sound to us, well that’s enough to catch just about anybody’s attention!

Afifa and Mir Ahmad of St. George, Utah, were at Best Friends hoping to find an African Gray parrot to adopt. They’d both wanted one forever. As they toured the outside play areas, Allie the African Gray pulled out one of her favorite mimics. It’s the classic "Awwww" you hear when somebody sees a kitten looking up at them with wide, googly eyes. It’s a potent sound, and Allie knew how to use it well.

After grabbing their attention, Allie continued to pour on the charm. You see, she had an ulterior motive: she had to be charming enough for two birds! If Allie got adopted, she was planning on bringing a friend with her. When Mir and Afifa asked about adopting Allie, they learned she was paired up with another African Gray, a bashful bird named Aloe. At first, Afifa and Mir got cold feet. Planning to adopt one bird and then suddenly being asked to consider two instead is jarring. If nothing else, think how long these birds can live. We’re talking a human lifespan. That’s a big commitment.

But then they watched Allie and Aloe together and saw how well the two got along. That made Afifa and Mir think perhaps a double adoption would be OK.

Read about the Parrot Garden at Best Friends

Two more trips to Best Friends sealed the deal. They adopted both. And they’re so glad they did! Aloe may be a little reserved, but he is "one cool bird," as Afifa describes him. (She’s their main caregiver.)

Afifa loves to tell a funny story that happened with shy Aloe not long after the adoption. Allie was in a cage on their back porch. Still the adventurous one, Allie loves to be picked up and cuddled, and she enjoys new things. With Aloe, not so much. He’d rather stay in his main play area and not rock the boat. This particular afternoon, though, Afifa was outside with Allie when both birds started chatting across the distance. Afifa went inside and tried to talk with Aloe, but he gave her the silent treatment.

Back outside, Allie also became quiet. Hmmm. Something was going on. Afifa brought Allie back in to see if the two pals wanted to hang out again. That did the trick! Aloe, who is usually reserved, became so excited he did a little dance of joy and even raised his foot for a high five. Er, a high four. Sound like they’re happy to be in the same home? You bet. Looks like Allie sure knew what she was doing back at the sanctuary!