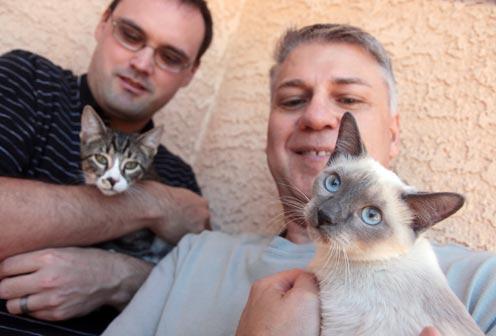 When Roger Maas and his partner Rich were looking for a new cat at Best Friends, they thought they knew what they wanted: an older cat. You see, their 20-year-old Siamese had just passed on. They certainly knew the ins and outs of older cats. Little did they know who would end up stealing their hearts instead — a couple of fluffy kittens less than 6 months old!

Not just any kittens, either. These two kittens are FIV positive and came to Best Friends on trade from a rescue in Texas. Rich and Roger admit they didn’t know much about FIV cats before considering the adoption. They’d heard about the feline immunodeficiency virus, of course, but didn’t know enough to make an informed decision.

It all started when they noticed Pixie Dust the kitten on the Best Friends website before making the trip up from Mesa, Arizona. That adorable little face was all it took to start swaying their focus away from the older cats. But first, the homework!

Learning about the feline immunodeficiency virus

After speaking with their vet and reading up on the subject, they came to realize something. They realized FIV isn’t as big a deal as they had feared. FIV cats, they learned, can still live long and healthy lives. Anybody who doubts that point can swing by Best Friends and meet plenty of healthy, happy senior FIV cats who could probably still give you a run for your money! One other detail also helped sway their decision. They knew that FIV cats have a hard time finding homes. Here was a chance to help.

So they swung up to Best Friends and spent a little time with Pixie Dust and her brother Half Pint. That’s all it took to seal the deal. They wanted to adopt.

Back home, the two kittens (the only cats in the house) have been settling in perfectly. They’re still a teeny bit skittish taking in the new terrain — ceiling fans in particular make them scurry by in a hurry — but they are affectionate as can be. If Roger or Rich lie down on the floor, Pixie Dust and Half Pint hurry over and start rubbing up against their whole bodies, head to feet. Can’t beat a full body massage!

Goes to show that sometimes what you find isn’t always what you started out looking for, but no matter how you view things, this was a happy ending meant to be. Congrats!

Avoid the misconceptions and learn more about FIV. Then check out some of the other adoptable cats with FIV living at the sanctuary.