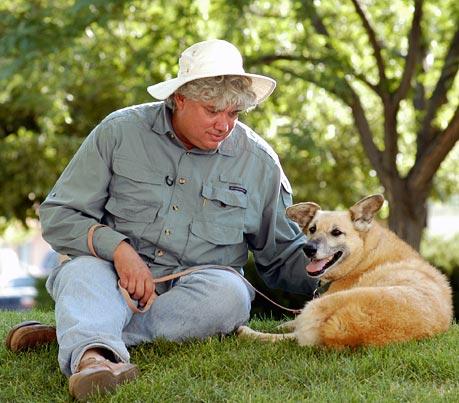 An adoption event for one dog

An adoption event all to herself? No wonder Cleo the dog had a radiant smile on her face during a recent street festival. What a lucky dog to have staff members Russ Mead and his wife, Laura Allen put on a one-dog adoption event just for her.

This retired street-fighter from Mexico has lots of obstacles to overcome to finding her family. Cleo is as much of a mutt as any dog can be. She is not the prettiest of pooches -- missing one leg, her tail and her spleen... all from dog fights. She absolutely hates other dogs and tries everything she can to get into fights -- with rare exceptions because the few dogs she loves, she loves with all her heart. She simply cannot be in a home with cats. And she is an older girl with arthritis who can’t walk very far.

Obviously, Cleo would fail miserably at an adoption event where she would have to be side by side with other dogs. She might attack them! And most of the people who come to the sanctuary to adopt are looking for dogs who like other dogs.

But Cleo has a smile that can light up a room when she is around people. Her love for people is unconditional and immediate. Russ and Laura had gotten to know Cleo and they just could not accept that her chances of getting adopted were so small.

So, since Cleo could not be mixed in with other dogs at a normal mobile adoption event, why not find a venue where she would see lots and lots of people and few dogs?

"And if there was ever a dog who was a poster child for what Best Friends stands for, that would be Cleo," Russ said. "So wouldn’t she be a great teacher to help people understand the essence of the Kindness Revolution?"

Adoption event for one dog

Russ and Laura decided to set up an "Adopt Cleo Event" at the July Jamboree Street Festival in nearby Cedar City. They made up adoption flyers for Cleo and plastered them everywhere at the festival.

"Cleo was happy to see everyone who stopped by our booth," says Russ. "People began stopping by, saying ‘We came to meet Cleo.’ She greeted everyone, including children and babies, with a kiss. She loved to be petted."

Whenever Russ or Laura spotted dogs walking in their direction, Cleo was quickly put inside a show crate.

"Our booth was next to Bikers Against Child Abuse, and many of the bikers had their children with them. The children hung around Cleo during the event. One little girl, Hannah, stood lookout and let us know when a dog was coming so we could put Cleo in the show crate. Hannah cried when it was time to leave. She and Cleo had bonded," Laura said.

Cleo basked in the attention and this dog, who normally doesn’t stand out, suddenly was stunning.

"People commented repeatedly that she was just beautiful and sweet," Russ said. "We told them her story: that she had been placed in a shelter in Mexico and some dogs attacked her and tore off her leg and tail; that some volunteers from Canada rescued her and she ended up at Best Friends; that she’s great with people but is understandably now afraid of, and aggressive towards, dogs and other animals.

"People were sympathetic and understood she needed a home with no other pets. Some wanted to know how she gets around, and we could tell them that the missing leg doesn’t stop her. She loves to chase the ball and sometimes she brings it back, and that she enjoys swimming.

"We asked everyone to spread the word and described the kind of home she should have. Two boys, who were about 11 to 13 years old, took a handful of the posters and walked around handing them out, hawking Cleo.

"Thanks to Cleo we signed up about 35 people as members of Best Friends that night. Some people just handed us money to help Cleo."

Now, the only thing left is the happy ending where this special dog finally gets a family. But in the meantime, Cleo got to star for one day as the canine ambassador for the Kindness Revolution.