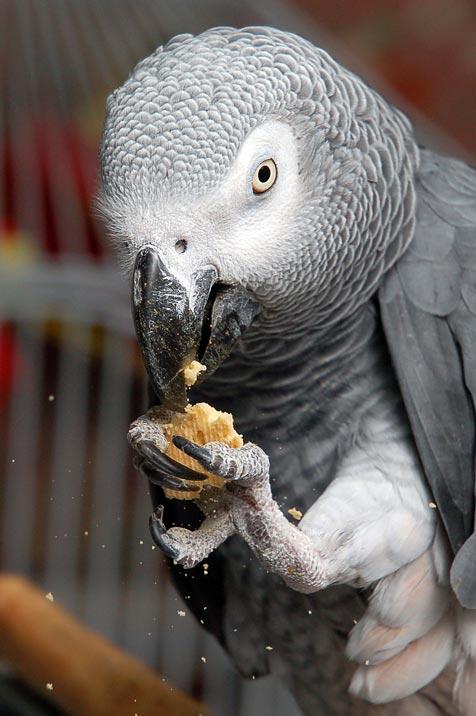 African gray parrot who was born to party

Cody the African gray parrot was born to party. Recently, the bird staff members were laughing it up in the kitchen at Feathered Friends (the bird area at the sanctuary), and Cody happened to be close by. All of a sudden, Cody let out a very distinct "Where’s the beer?!" Not once but twice! How's that for letting your true colors show?

African gray parrot who knows a lot of words

He's quite a riot, with a major vocabulary at his disposal. Cody loves to say all manner of things, from "Tickle, tickle, tickle," to "Praise the Lord!" Parrots are quite intelligent creatures. Not only did Cody learn to say a phrase like "Where’s the beer?" but he learned how to say it in context. Think about that for a moment. All that laughing and joking around must have convinced Cody that the good times were about to roll. Time for a party, he figured, and he wanted in. Can’t blame a guy for trying, right?

Many birds can be a little too smart for their own good. They can learn how to spring open cage doors, disassemble expensive toys in minutes, and break out the swear words just as the family sits down for dinner. (A hint about parrots: If they can get a rise out of you, they will!) With Cody, though, most of the time he just wants to be part of the action. At least nobody's taught him yet how to suggest playing a game of spin the bottle.

Learn about parrots as pets.