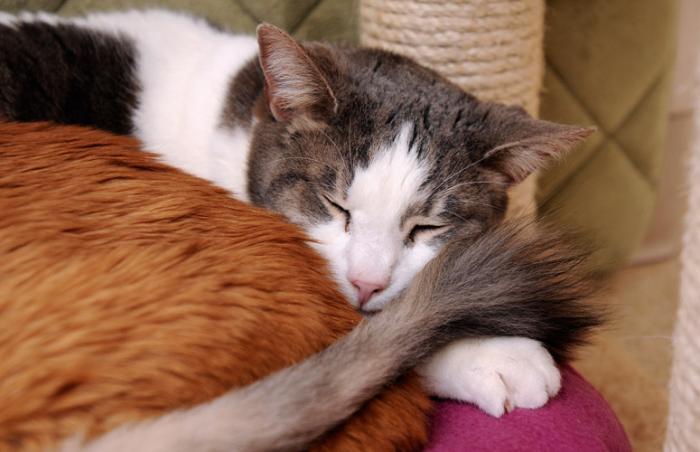 Altruistic Alfie is an intuitive and sensitive guardian angel cat

To say that Alfie is a cat's cat is a bit of an understatement. Humans have never impressed him much, most likely because he spent the first two and a half years of his life in a horrible hoarding situation. He had hundreds of other cats for company, but he never got the socialization or attention he needed to accept people as his companions. He'll let his caregivers get within a few feet of him, and sprinkle some yummy treats by his feet, but that's just about as much human interaction as he can take.

But there's more to Alfie than meets the eye. He lies quietly on his bed for much of the day, but once his caregivers leave for the evening, he comes alive, running around the lobby of Quincy House, the building in Cat World in which he lives, rousing his companions with quick little meows and chirps. Caregivers Judy Preus and Felicia Fullerton know this because they've caught him in the act a few times - much to Alfie's chagrin.

He doesn't mind, however, if they catch him getting up to some of his really special tricks. You see, Alfie isn't just a friend to other cats; he's also something of a mentor and guardian angel. A sensitive, intuitive guy, Alfie can tell when another cat needs a little help or coaching. 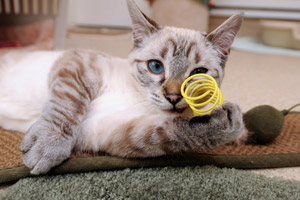 A mentor to other cats

Take Coachella, for example. He is a young cat who is being treated for an intestinal condition that makes it difficult for him to get to the litter box in time. Perhaps because he's spent so much time around humans, getting medical treatment, Coachella's social skills with other cats are a bit lacking. He isn't sure how rough is too rough when he's playing with them, for instance.

So Alfie has taken it upon himself to teach Coachella these crucial skills. According to his caregivers, he models good interaction with other cats, and, if Coachella ever gets in trouble with another cat, Alfie can quickly diffuse the situation. All of this coaching has definitely paid off. Coachella is now able to not only engage successfully with the majority of other cats, but he can also win over cats who don't normally interact with other felines. One example is Duke, a cat with cerebellar hypoplasia, a neurological condition that affects his motor skills. Duke usually keeps to himself around other cats, but he will play with Coachella from time to time. 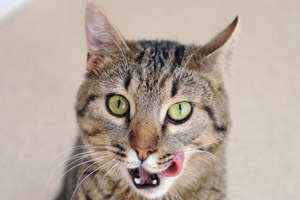 Another neurological cat, Spud, is also getting some extra help from Alfie. Before he came to Best Friends, Spud suffered a severe reaction to anesthesia while he was being neutered. He almost lost his life. Luckily, he survived. But he did lose most, if not all, of his eyesight and some of his motor skills. And this makes it hard for Spud to navigate the lobby of Quincy House.

Alfie noticed Spud struggling, and he didn't hesitate to step in. He started acting as a guide for the blind cat, nudging him over to the food dish at feeding time or herding him back inside from the cattery when it's time to go inside. He does this by rubbing up against Spud and/or by chirping to him. With Alfie's help, Spud now gets around Quincy House just fine, and he never misses dinnertime.

If the Quincy House cats took a vote, Alfie could easily win himself the title of "Most Popular," or, perhaps more fittingly, "Most Altruistic." Along with his caregivers, he's helped to improve Coachella and Spud's lives. And he's certainly adored by both cats and caregivers in return.

For more information on Alfie, Spud, or any of our other adoptable cats, click here.