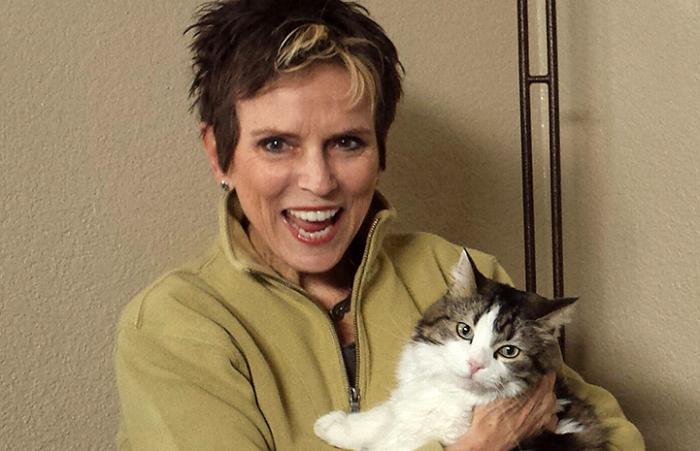 Longtime Best Friends volunteer Reneé Mezzone didn’t really know what the meeting in her hometown was about — only that Best Friends staff came to Tucson, Arizona, to host it and representatives from Pima Animal Care Center (PACC) would be there. The venue was a local PetSmart store.

But Best Friends is always exploring new ways to help our No More Homeless Pets Network partner animal shelters boost their adoptions. One project proposed was to recruit volunteers to show more adoptable dogs and cats from shelters in local PetSmart stores. And Tucson offered a great place to try this out with the area’s municipal shelter, PACC.

Had Reneé known this, however, she might not have gone. And she certainly never would have guessed that the meeting would lead to a volunteer opportunity with her local animal shelter that has become one of the greatest joys of her life — even if Best Friends had to warm her up to it first.

A history of volunteering

It all began when, a few years ago for her 60th birthday, Reneé decided to do something big and bold. So she and a couple of friends hopped in the car and headed to Best Friends Animal Sanctuary in Kanab, Utah, to volunteer.

Two of them found their life’s calling. For Reneé, it was with cats. Then and there, Reneé’ and one of her friends decided to make Kanab their home, where they could help the animals at the Sanctuary even more.

Reneé did that for a couple of years. Then she headed back to Tucson to share what she had learned with local rescue groups. But would she want to volunteer at PACC or any other municipal animal shelter? That was a definite no — even though PACC was dedicated to becoming no-kill.

“I always thought of PACC as ‘the pound,’” says Reneé. “I had this image of a sad, depressing place where the animals were on death row.”

Her image was based on a common stereotype about animal shelters. Like many people around the country, she didn’t want to risk seeing it firsthand, in case it was reality.

But many people, Reneé included, don’t realize how many animal shelters around the country are working hard to change that. In fact, of the more than 1,400 Network partners, around 13 percent either are (or function as) open admission municipal animal shelters. And the only way to end the killing of dogs and cats in shelters is to help the actual shelters.

“Reneé was definitely hesitant to volunteer for PACC at first,” says Kimberly Elman, Best Friends national volunteer program specialist who represented Best Friends at that meeting in Tucson. But to get the program up and running quickly, Kimberly really needed someone with a wealth of experience, and Reneé had that in spades. Kimberly knew Reneé needed to see that the PACC staff cared about the dogs and cats in their care as much as Best Friends. Getting her there just required a little creativity. 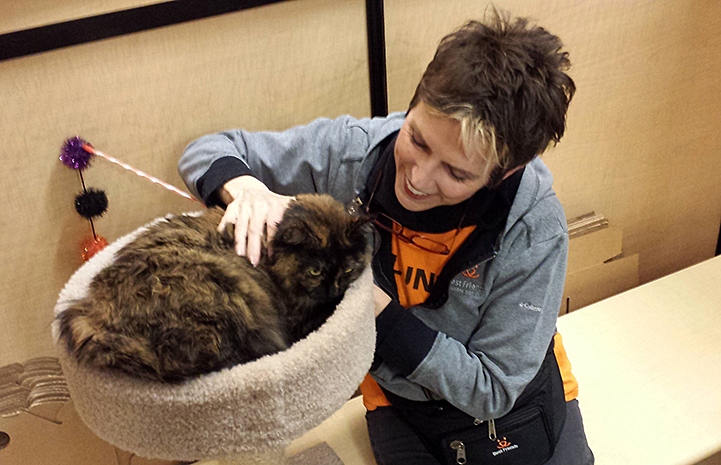 Everyone needs a hand

Best Friends had brought together its Tucson-based members and volunteers to discuss helping PACC to show dogs and cats in the PetSmart store. Store staff had been doing the best they could, juggling store duties and adoption inquiries. But having dedicated Best Friends volunteers manage adoptions could increase the number of animals going home.

“We believe partnerships need committed volunteers and staff who are fully integrated into programs, which leads to success for both us and our partners — in this case PACC,” says Pat Guerrero, national volunteer manager for Best Friends. “Thoughtful and planned engagement of volunteers is helping us all to achieve our goal of saving more lives.”

Reneé, of course, wasn’t so integrated into the program — not yet, anyway. Prior to that meeting, she still had no interest in involving herself with PACC.

Kimberly, however, knew this proposed volunteer position fit Reneé like a glove. So rather than try to convince her of that, Kimberly took a different approach. “I had to beg her to go to the informational meeting by requesting her attendance as my personal assistant,” she says. Reneé adds, “I thought I was there at the meeting just to greet people and direct them where to go.”

Well, it ended up putting her in the right place at the right time, which was just what Kimberly had hoped for.

During the meeting Reneé listened to how much the PACC staff wanted to do more to help homeless cats. And at the end of the meeting, just as Kimberly had hoped for, Reneé tentatively agreed to give cat adoptions at the PetSmart store a try. It proved to be one of the best decisions she ever made.

Now, for several hours each Saturday, Reneé handles everything related to the shelter cats’ care and adoptions in the store. She goes the extra mile by taking home laundry. She even learned to sew so she can make warm, snuggly mini-blankets to brighten up the store kennels and send home with adopted cats.

“The dedication of the PACC team and the staff at PetSmart has been outstanding,” she says. “If a cat suddenly comes down with an illness, the shelter team takes care of it right away, and if there’s anything we need to keep the cats healthy physically and mentally, the store manager tells us to help ourselves.”

She says some days there may be no adoptions and others they may celebrate empty cages. Either way, she finds the whole experience incredibly uplifting.

“These cats come in to the shelter and are sometimes filthy, in terrible health, abandoned or from the streets, and I get to help them go home,” she says, emotion pouring through her voice. “I’m so grateful for everything that has come out of my association with Best Friends.” That included this role that she only reluctantly agreed to.

And Best Friends is just as grateful for the many volunteers like Reneé who help around the country to save more dogs and cats in animal shelters.