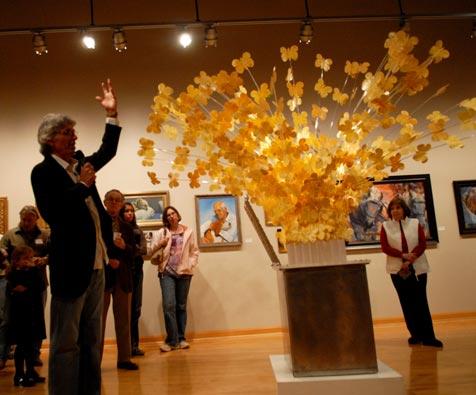 When Best Friends co-founder and artist Cyrus Mejia first learned of the chilling statistic that 5 million animals were put to death every year in animal shelters across the country, he did the math and realized that meant 575 animals killed every hour.

That sad truth inspired his ambitious 575 Project, which is currently on display at Dixie State College in St. George, Utah, as part of a multi-artist exhibit called Art for Animals portraying animals as sentient, intelligent beings.

The 575 Project has been displayed in several places across the country, but this is the first time it has been shown in its entirety in Utah, home to Best Friends Animal Sanctuary.

"I hope people in the area will take the time to walk through the exhibit," Cyrus says. "And I hope it will inspire people to adopt rather than buy animals, that they’ll understand they’re actually saving a life by doing so."

About 200 people attended the opening reception on November 14. Kathy Cieslewicz, curator of the Sears Gallery at Dixie State College, was pleased with the turnout.

The Art for Animals exhibit has been two years in the making. "That’s when I first met Cyrus," Kathy says. "And when he told me about the installation, it got me thinking that the idea of a show centered on animals had the potential to be not just visually appealing, but also educational. And from there, the idea took on a life of its own. We decided to add other artists and this is the result."

During the reception, Cyrus walked the attendees through the 575 Project, explaining his thought processes and inspiration behind each part of the installation.

Artwork to raise awareness about animals in shelters

Some pieces require little explanation, like "Carry Me Home," a doghouse covered with 575 dog collars collected from animal shelters.

Other pieces are built upon layers of subtlety – for instance, "3 to 5," a large screen depicting ink drawings of cats. It represents Cyrus’ interpretation of yet another sad statistic: Cats generally live only three to five days in a shelter before being killed. Each drawing was made with only three to five brush strokes, and all five panels were completed within five days.

The most emotional component of the show involved audience participation in the performance art piece, "575 Candles Blown Out." Cyrus asked attendees to follow him out of the exhibition room into the hall, where he had placed 575 candles handmade from empty cat food cans. He asked everyone to help him carry them outside and light them. It took about half an hour. Then everyone blew out the candles, which took about 25 seconds.

Other Art for Animals artists included Donald E. Brown, who created a compelling piece called "Help Baja Animal Sanctuary," a brightly colored painting of a dog straining over a fence for attention.

Cyrus also put up four of his own larger-than-life paintings from his latest series still in the making, Pits and Perceptions, a project supported in part by the Culture and Animals Foundation. Each 49- by 56-inch canvas features an "in your face" depiction of a sweet, loving pit bull.

"The idea is to get people to change their perceptions of pit bulls as dangerous dogs," says Cyrus. "When I was a kid, pit bulls were considered family pets, like Petey from the show ‘Little Rascals.’ And I thought if perceptions can change once, why can’t they change again? This is what I hope to accomplish with Pits and Perceptions."

Art for Animals runs through January 16 at the Sears Gallery in St. George. A percentage of all sales from the show will benefit various animal welfare organizations.

Read about Best Friends' work around the country to help animals in need.