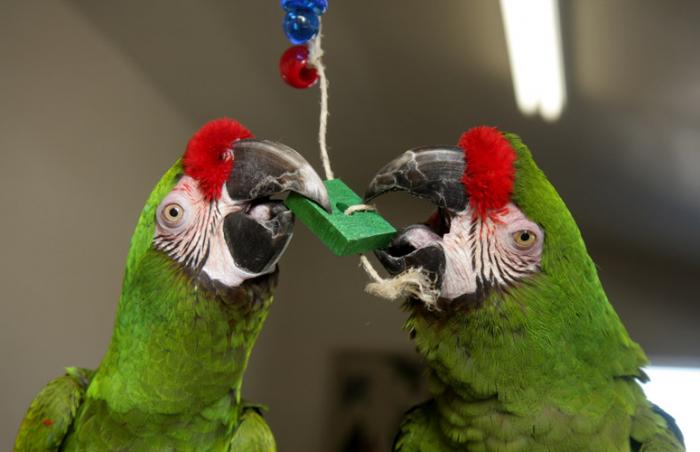 Santa had some assistance from three little elves this holiday season. And based on the stack of goodies the birds at Best Friends Animal Sanctuary's Parrot Garden received, it looks like they must have been on Santa's nice list. 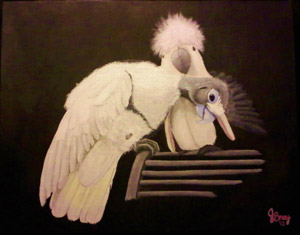 Janet Bray has a passion for parrots. In fact, her online store, Birdbrain Gifts, exclusively sells items designed for avian enthusiasts. Her enterprise has grown from an outlet to sell her own bird-themed artwork to one that supports other small businesses and artisans. However, one thing remained as the site grew - her dedication to bird rescues.

She began by offering half of her profits to select groups, but recently switched to a more successful model, earmarking items for the groups to profit on themselves. And what better to start with than a stunning portrait of King O, Best Friends' most renowned cockatoo?

"I chose King O because he's such a mascot," says Janet. "I don't have a personal tie to him, but because he plucks, he represents the typical distress of a parrot in rescue. I painted him with his 'ghostly' crest feathers because that is the way he sees himself. He doesn't realize he's got no feathers. It's kind of the way we hope people who adopt parrots will see them too - see them as they see themselves."

The painting was a huge hit, and Janet's online auction brought in $130 to be donated to Best Friends.

The winner, Becky Anderson, purchased King O's portrait for a Christmas gift for her son, Grady. You see, Best Friends holds special significance for their family since they first visited a couple of years ago.

Becky and her son, and sometimes other family members, visit Best Friends Animal Sanctuary every few months. However, not before making a call to Parrot Garden manager Jacque Johnson to find out what particular items are most needed. Perhaps it's a way to thank the folks responsible for their two most recent feathered family members, Hermes the Amazon and Gandolf the African grey.

So it was with much excitement that Becky contacted Jacque with the $130 donation news. That's when Jacque said the gift could go further if it came to Parrot Garden in the form of enrichment toys.

If you go to your neighborhood pet store, $130 won't go very far when buying parrot toys. But Becky knew where to turn - Judith Archer of the Parrot Posse. The posse is an informal group of avian supporters whose mission is to help parrots in need by providing food, supplies, cages and vet care. Because they purchase so much, they earn significant discounts. 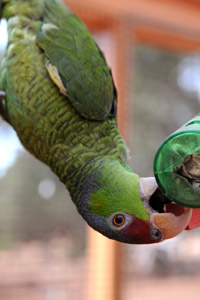 Thanks to Judith's purchasing power, an astounding 71 toys and perches were shipped to Parrot Garden for the $130 donation - right before Christmas.

Janet's painting started as a donation, but ended up representing so much more.

"I really liked seeing how a village can take a gift and turn it into something spectacular," says Janet. "It's very heartwarming to be able to work with other people for a common goal and achieve much more than we could achieve by ourselves."

Auction winner Becky and her son Grady are soon heading to Best Friends, where they'll see the tremendous impact the gift has made. You can be sure they'll visit King O, who will be enjoying his new playthings, along with all the other birds.

"Toys are a requirement (for parrots)," says Jacque. "You've got extremely intelligent creatures put into a cage. They need things to play with. It's just like having a little two-year-old at home. A two-year-old with one truck is going to be a bored and naughty child. It's the same with a parrot."

Hmm … similar to two-year-olds? Captivated by all these fabulous new toys, the birds at Parrot Garden will be exceptionally nice this new year. Well, at least when Santa's watching.

Photos by Best Friends staff and courtesy of Janet Bray