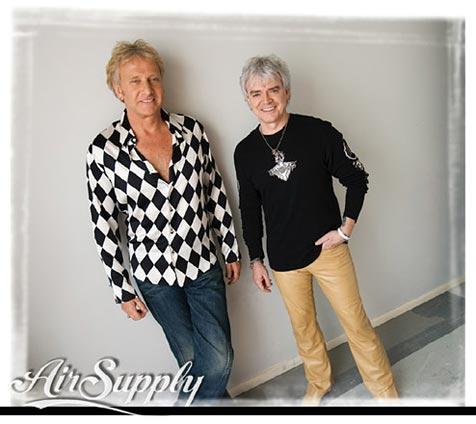 The band Air Supply to help the animals

There was a time when the band Air Supply was all out of love, but not anymore.

Air Supply and love of animals

It seems the world-renowned soft rockers have a soft spot for animals and the work of Best Friends.

Most recently, the band has proposed making Best Friends its charity of choice for its appearance on the television show "Rock & A Hard Place," according to Dori Stegman, a talent producer for Blaze TV.

Rock & A Hard Place, which airs on DirecTV channel 101, is a game show where some of the hottest music acts of the past and present test their knowledge on everything from music history to current events trivia to strange-but-true factoids.

Each team of contestants plays for its chosen charity, with all the proceeds from the night’s winnings going to that organization. The show is hosted by Meat Loaf. Among the scheduled matchups this season are Grandmaster Flash vs. The Pussycat Dolls, Eddie Money vs. .38 Special, and The Pointer Sisters vs. Sheila E.

The Air Supply episode would run next season, which begins in the fall.

Stegman also requested from Best Friends a 30-second video about us that would air as a "commercial" on the show.

Air Supply co-founder Graham Russell lives in Utah, several hours north of the Best Friends sanctuary. While he has supported the work we were doing, it took a fortuitous phone call to make a personal connection.

Helping a mule deer and synchronicity

Barbara Weider, who works in the Wild Friends department at the sanctuary, was calling around the state last year on behalf of a mule deer who had sustained a broken leg. Best Friends is not a licensed rehab facility for mule deer, so she was trying to find one. One of her calls was to wildlife rehabber Jodi Russell. Her husband answered the phone, and yes, it was Graham.

They talked for a bit and he said he’d like to do something for Best Friends. Coincidentally, Air Supply was scheduled to do a concert in St. George, Utah, which is about an hour-and-a-half drive from the sanctuary.

Graham arranged for us to have a booth outside the venue – where we collected several hundred dollars in donations from individuals – and encouraged people to support our work.

Graham, who was born in England, formed Air Supply with Aussie Russell Hitchcock back in 1975. After early success in Australia, the band exploded on the American music scene. Its 1980 album, Lost in Love, sold more than two million copies in the U.S. and featured three top-five singles – Every Woman in the World, All Out of Love, and Lost in Love.

They followed up with The One That You Love, an album that spawned three top-10 singles, including the title track, which hit number one on the Billboard Hot 100.

Air Supply has continued to record and tour. In 2005, the band released a live CD/DVD and became one of the first foreign acts to be invited to play in Havana, Cuba. Its first show had an audience of 175,000 despite the approaching Hurricane Dennis. The weather prevented the band from doing the next day’s show, but Graham performed an impromptu acoustic set for fans staying at the same hotel as the band.

They have a heavy tour schedule in 2008, including a stop next month in Las Vegas (about four hours from the sanctuary). They’ll be playing overseas through June and most of July before returning to the states for the rest of the year.