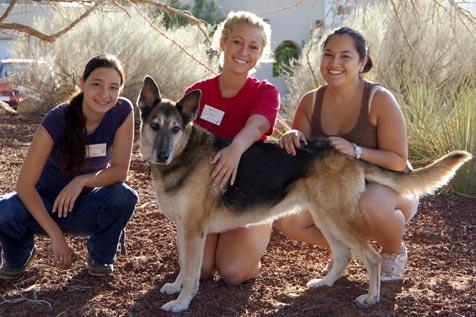 One day, in the not too distant future, Stacy Barton just might find herself on Capitol Hill lobbying senators and representatives to strengthen laws against animal cruelty. And Bernadette Montano might be bringing special needs children together with animals to make life better for all. Erin Chin might be working as a veterinarian at a sanctuary helping wounded birds to fly again.

Barton, Montano and Chin have always loved animals, but it was a six-week internship at Best Friends Animal Society that convinced them they wanted to make animals their lives’ work. And thanks to a new scholarship set up in the memory of a woman who could never turn away an animal in need, they had a little help paying for their airfare and living expenses while at the sanctuary.

Maureen A. Udell was a woman with a very big heart who lived in Coeur d’ Alene, Idaho. She once discovered that someone living in one of her rentals was keeping a dog on a chain outside with no shelter from the harsh Idaho winters. She convinced the tenant to sell her the dog. She had the dog spayed, named her Coco and gave her the best life a dog could wish for.

Udell’s daughter, Noel Steinfeld, remembers how her mom would find wounded crows on their Wisconsin farm and nurse them back to health. And she always donated to local rescue organizations.

"She could never turn away an animal in need," said Steinfeld, who today works in commercial real estate in Surfside, Fla., and runs a nonprofit organization called Friends of Surfside Cats. "I learned from her to take action and have compassion."

Setting up a scholarship fund in memory of their mother

So when their mother died in September 2006, she and her brother, Pat Udell of Coeur d’ Alene, decided the best way to honor her memory was to set up a scholarship fund that would help make the world a better place for animals. And they decided that Best Friends was the best place to do it.

"I wanted to do something related to education and I wanted to increase the focus on rescue," Steinfeld said.

This summer, they distributed the first $1,000-per-year scholarship to be divided among four people in the Best Friends Internship Program. Barton, Montano and Chin received the first three $250 scholarships, and a fourth will be given to an intern in the October/November internship group. Hereafter, the $1,000 will be split four ways among the four internship sessions Best Friends offers each year.

Barton, Montano and Chin were three of five interns in the July-August internship session. Sessions are also held in October-November, January-February and May-June.

Jill Simpson, a humane educator who facilitates the internship program, has watched many lives bloom. She’s seen young people like Barton, Montano and Chin make decisions on their future career paths and she’s watched older people make mid-life career changes. The internship program is open to anyone age 20 and over.

"Some have had a total life and career change," Simpson said. "A lot of them come here for the direction. They love animals, obviously."

What’s the main requirement for the program?

"They have to have enthusiasm and a desire to work with animals," Simpson said.

Barton, Montano and Chin certainly have all that, and more.

Montano works as a special education assistant in an elementary school in L.A. where she also volunteers with Best Friends’ L.A. Program.

"You can always find me in the kid’s booth with my face painted," she said.

The interns spend the first two weeks working in all the animal areas, and then choose one or two areas to focus during the next four weeks.

"I concentrated on the dog areas and spent a half-day a week in horses," Montano said. "I’ve always loved dogs, but I hadn’t been around horses a lot."

The internship convinced Montano she wants to pursue a career doing animal-assisted therapy with children with special needs.

"I came here with the idea of what I wanted to do, but after being here, I realized I really want to do that," she said. "I loved everything about it."

Barton just graduated from Texas Christian University in Fort Worth with a degree in marketing.

"Animal welfare is a passion of mine," Barton said. "I knew I wanted to do something with animals, but I just didn’t know in what capacity."

Barton spent her six weeks working in the dog, cat and bird areas. She’s decided to hone her skills at a marketing firm and then get a job with a nonprofit organization. Eventually, she wants to become a lobbyist advocating for animal welfare issues.

"It gave me such valuable experience that I can take back with me," Barton said of her internship at Best Friends. "Best Friends has perfected everything. It was very inspiring."

Chin, who’s from California, will be a senior at Mount Holyoke College in Massachusetts, where she’s majoring in neuroscience and behavior. She spent her internship working in dogs, horses and birds. After six weeks at Best Friends, she now knows she wants to get her master’s degree in zoology, go on to veterinary school, and eventually become a veterinarian specializing in birds.

Interns also take on a special project while at the sanctuary. Chin created a community on the Best Friends Network for the Clubhouse dogs. Montano expanded the Best Friends Internship Community, and Stacy did a marketing plan for birds. Other interns have invented games and lesson plans for children that can be used in Best Friends’ humane education programs, and one intern even did a study on the effect of music on dogs.

"I encourage them to think outside the box as much as they can," Simpson said.

Get more info about internships at Best Friends.