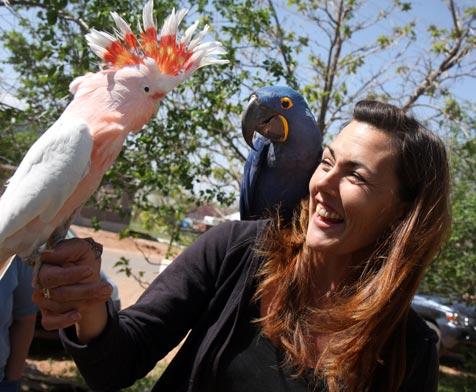 Some animals believe in sending subtle cues to their people. "Mom, when I twitch my whiskers in a south-southeast direction, that means I want a can of wet cat food, stat!" Sad to say, many of these communications are lost in translation. Joey the hyacinth, though, doesn’t like taking chances in being misunderstood.

Joey recently arrived at Best Friends, along with his friend, Honey, and he’s definitely an attention-getter. According to rumor, when he was a baby he’d stick his head out the bars of his cage for attention. He did this so often he even started rubbing the feathers off! He’s the kind of bird who will lie happily on somebody’s chest for a snuggle session from now until the end of time.

Hyacinths are the largest species of parrot out there. They’re known as ‘gentle giants,’ because all they want is to be loved. And true to his reputation, Joey is nothing but a humongous love mush. His person got him when he was a baby, 19 years ago, along with his friend Honey the Major Mitchell’s cockatoo.

Honey, named after the candy bar Bit O’ Honey because of his coloring, is also a character in his own right. He loves dancing for strangers and strutting around his cage. But there is one big difference between the two, aside from their size and coloring. Joey thinks he’s a person, and Honey most definitely knows he’s a bird. While he enjoys meeting people, he’s much more excited to hang out with a feathery pal.

These are both rare birds. In fact, Joey and Honey are each the first of their species to come to Best Friends. Hyacinths and Major Mitchell’s cockatoos, like many larger parrots, can live a human lifespan. Joey’s family had these birds for 19 wonderful years and they’re not even a third grown yet.

And of course, a lot can happen in 19 years. Once the parrots’ family retired, their lifestyle changed. After retirement they were gone more often, sometimes for weeks at a stretch. Their person knew that these birds, Joey in particular, weren’t happy being left in the care of a pet sitter for so long. Even though she broke down into tears whenever she thought about giving them away, she realized they needed a better home than she could provide anymore. Joey was a people-bird. He needed somebody to love! And so did Honey.

She called Best Friends hoping to find some advice on where to place them. She’d already been trying for months to find homes for these two in California.

Turns out space had just opened up at Best Friends. All she’d been hoping for when calling was some help in finding them a home. But when things lucked out to where the birds could come to the sanctuary, she broke down crying.

Ever since their arrival, Honey and Joey have been wowing visitors at the Parrot Garden. These two huge guys have personalities every bit as colorful as their feathers. They’re instant celebrities everywhere they go. In fact, they may even try some educational events, with their friendly and easy-going natures. Welcome you two! Nice to have you around.