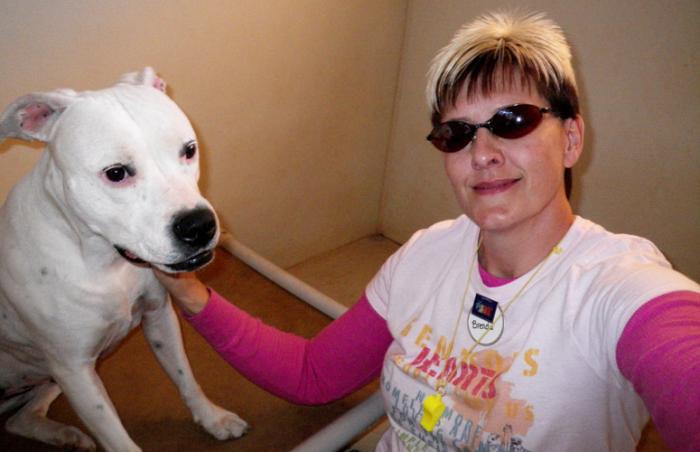 Imagine if $4,000 landed in your lap. What would you do with such an unexpected windfall? That was no dream for Brenda Olson-Wray, who received the money in 2011 from an oil company, which leased some of her land for mineral exploration. Brenda decided to spend the money on a trip to volunteer at Best Friends Animal Sanctuary. She’s returned every six months since then, with her most recent trip in October to celebrate a milestone – her 50th birthday.

It was a birthday like no other. The day started in Dogtown with a canine serenade attempt at “Happy Birthday,” but it came out more like some animated howling. Still, it was music to Brenda’s ears.

She got to work walking dogs, but when it started snowing, she took a break to visit with Harrison, one of her favorite dogs.

That evening her friends and family had reservations at the nicest restaurant in town, but reluctantly canceled when Brenda said she’d rather spend the evening with a dog from the Sanctuary. Their celebratory dinner consisted of take-out and birthday cake. Brenda couldn’t have had a happier birthday. 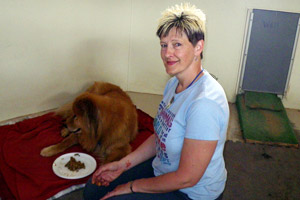 Special reminder of her bond with a dog

On Brenda’s first trip to the Sanctuary, she formed a special bond with a dog called Orlando.

He was her first sleepover dog, spending every night with her. She liked him so much that on her next trip to the Sanctuary, she took him to her hotel each night again. Brenda so hoped that Orlando would get adopted soon; she vowed she’d get a Best Friends tattoo to commemorate the occasion when it happened. She anxiously waited to hear that Orlando found a home, but the news just wasn’t coming.

Brenda’s friends said perhaps if she got the tattoo, then he would be adopted. She conceded and got a Best Friends logo tattoo on her right wrist. A few months later, Orlando was adopted.

Not only did Orlando benefit from Brenda’s pledge to him, but she does as well. Employed as a victim witness coordinator, her job is demanding. But Brenda says, “Now, when I’m stressed, I just look down at that Best Friends tattoo and I know that somewhere on this earth good things are happening. That’s all I need to push me through the moment.” 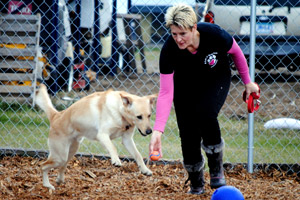 The spirit of Best Friends continues beyond her tattoo in honor of Orlando’s adoption. Back home in Fargo, North Dakota, Brenda is a core volunteer for 4 Love of Dog Rescue, a No More Homeless Pets Network partner.

When the rescue group took in 174 dogs seized from deplorable conditions at a puppy mill, Brenda volunteered daily to care for dogs, fostering and eventually adopting one. Brenda loves helping locally, but will always treasure the memories from her 50th birthday at the Sanctuary.

The animals at Best Friends get attention from volunteers and staff every day; the fact that Brenda got to be one of the people providing love was very special to her. “Going to Best Friends felt like I was doing something meaningful,” says Brenda. “Although the dogs won’t necessarily remember me, they will remember that someone touched them, someone walked them, someone sat with them. That fills my heart – way more than jumping out of a plane or checking a box on a bucket list.”