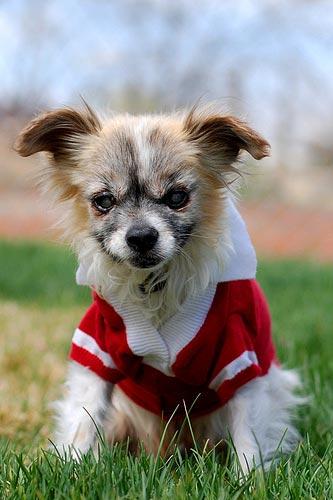 When Pat and Larry Donoho heard about a small, aging, blind, diabetic Chihuahua whose name also happened to be Larry, there was no question in their minds. "We’ll take him," said the Donohos, who work as mobile adoption coordinators for Best Friends.

Little Larry and his three Australian cattle dog housemates lost their person when she passed away in 2007. Afterward, the four dogs – Cody, Cheyenne, Dakota and Little Larry – remained for 10 long months in their Las Vegas home, living alone, while a couple of friends took turns each day feeding them and giving Little Larry his insulin shots.

But as the house was about to be sold, the circumstances turned desperate: Little Larry was becoming lethargic and losing weight, plus the friends were told all the dogs had to be out of the house. Best Friends’ Animal Help Department, contacted by the friends, offered tips for finding new homes. The friends then sent out fliers, posted ads and spread the word about the dogs’ plight.

The effort worked for Cody, who quickly found a home. Then, two weeks later, the remaining two cattle dogs found homes too, one on a ranch and the other with a family. But because of Larry’s medical issues, no one was interested in the 13-year-old, long-haired Chihuahua.

The Donohos took Little Larry to a veterinarian for tests and a medical exam. He is now getting twice-daily insulin, eating twice a day, plus he’s gained a pound. "He loves to wander around the yard," Pat says. "He's eating his whole portion at mealtimes. Our other animals are so gentle and forgiving with him. He runs into them all the time, but they don't care. He’s enjoying life. You should see him with a bone. He loves them."

At first, Pat says, Little Larry yipped each time she approached him with a needle. "He knows me now and wants me to hold him," she says. "He no longer cries. He knows I’m not going to hurt him."

Little Larry's settling in well, although he’s becoming increasingly hard of hearing. "He’s my deaf and blind little man," Pat says. "He is absolutely no trouble."

Postscript: After this story was written, Little Larry, who lived with the Donohos for three months, took a turn for the worse. "He was doing so well," Pat says. "He’d gained weight and was happy." He slipped into a semi-coma and they took him to their vet, where he passed away quietly with Pat and Larry holding him. The vet told them the 10 months after his person passed away had taken its toll on him.

"He was loved and cherished, and he knew it," Pat says.

Little Larry’s saga is an example of older pets who need hospice care to live out their last months, or even days and weeks, in warm, loving homes. As difficult as it is to take an older pet in, only to lose him a short time later, Pat says she would do it all over again.

"We took him in because he needed us," Pat says. "He had no one else. He made us smile, and he let us cuddle and brush him. We are honored that he loved us back. We wish we’d had him longer, but we wouldn't trade one minute with him. He was a joy."

Consider making a donation to help dogs like Little Larry.