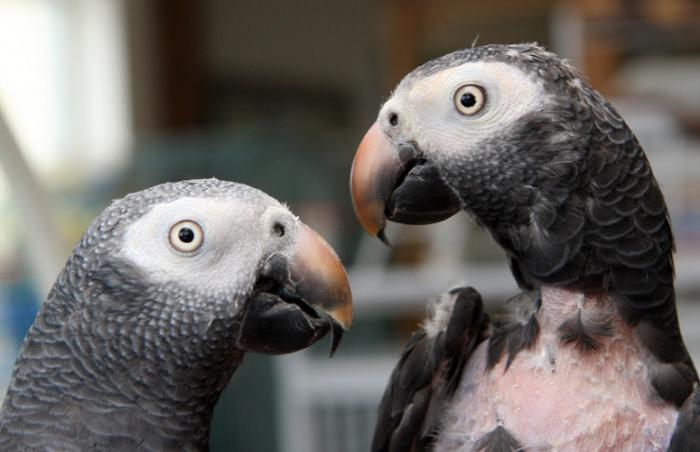 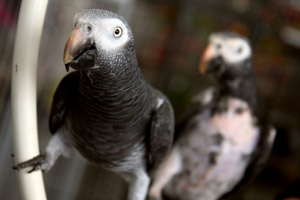 Kiwi and Higgins, a bonded pair of Timneh African grey parrots, are headed home! The birds have lived in Parrot Garden here at Best Friends for seven years. Why hadn't they found the right home in that amount of time? No one really knows, but maybe it's because Kiwi needs some time to warm up to new people, and Higgins is a feather-picker, so she is almost always naked. And, according to Jacque Johnson, manager of Parrot Garden, people tend to pass up "feather-challenged" birds.

But not Jim Reed. Jim came to the Sanctuary from Orem, Utah, looking to adopt a new friend. He met parrot after parrot, but nothing seemed to click. That is, until he saw Kiwi and Higgins - and then it was love at first sight. "He kept telling Higgins what a beautiful girl she is," says Jacque. The last time Higgins heard that was two years ago, when a little girl from the Make-a-Wish Foundation visited the Sanctuary and proclaimed that Higgins' enlarged feather follicles made her look like she was "covered in beads."

Clearly, Jim also saw her beauty, and Kiwi's. He spent an hour with the pair during his initial visit and "loved every minute of it." There was no way he was going home until the adoption was final; he didn't want to take the chance that somebody else would scoop them up. Chuckling, Jacque says, "These parrots were here for seven years. They weren't going anywhere. But Jim insisted on signing the paperwork that very day." 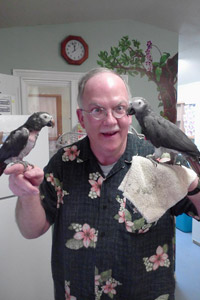 Jim has good reason to "go grey." According to Jacque, African greys are the most adoptable birds in Parrot Garden. They are very smart (research reveals they have the intelligence level of a two- to five-year-old child). Congo African greys have large vocabularies and the ability to use words in context. Timneh African greys, like Kiwi and Higgins, are better at imitating sounds, like ringtones and old-style fax machines. But generally they are quieter than macaw parrots and cockatoos.

There were other factors to consider, too. Jim's house is not large, and he had concerns over whether or not he could manage some of the bigger parrots. "These two sweet birds are the perfect size," he says, adding that they were also well-socialized by the Parrot Garden staff. "Where could anyone find a better package deal than this?"

Preparing their home for birds

Speaking of package deals, Kiwi and Higgins are getting one too, as they will be pampered not only by Jim, but also by his wife, Linda. The couple is hard at work preparing their home for the birds' arrival. The parrots' cage will be situated in front of a large picture window in the Reeds' living room, so that they can get sunshine and be in the center of the action. There, they will also be in good company with the Reeds' Shih Tzu, 17-year-old cat, and betta fish.

Staff at the Sanctuary are thrilled that these long-term residents have finally found the perfect home. But no one could be more excited than the Reeds, who can't wait to start spending quality time with their new "kids."

Visit Parrot Garden to see some of our other adoptable residents.