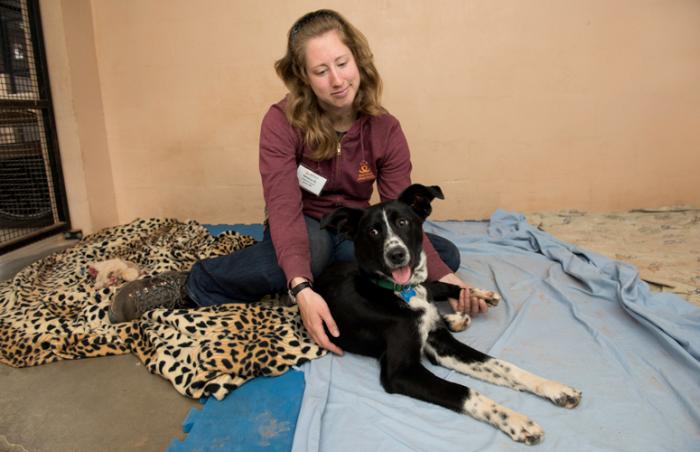 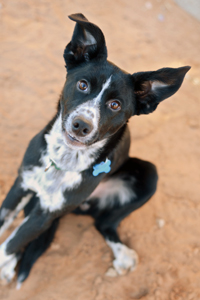 Hamlet the border collie has no idea that he’s not a totally normal puppy. The spunky little border collie mix frolics and plays tug-of-war all day long with his roommates, who are as young and full of spunk as he is. But if you look closely, you can see Hamlet’s back legs aren’t quite right. At Best Friends, we don’t see Hamlet as imperfect — just different — and we’re working to make sure he never feels he’s anything less than perfect.

Extra help for a puppy with a physical challenge

Hamlet was found as a stray in a rural area where he had trouble fending for himself. Luckily, he was rescued and taken to a local shelter. He was plenty adorable, but soon after his rescue, it became clear he had either suffered some trauma or was born with a condition that prevented his legs from growing correctly. The shelter didn’t have the resources to get Hamlet the treatment he needed, so the joyful young dog was brought to the Sanctuary.

Best Friends veterinarians checked Hamlet to better understand the physical challenges he faced. The exam revealed that muscle or nerve damage makes it impossible for the little puppy to walk on the pads of his feet like other dogs. Hamlet’s legs are a bit bowed, and his feet are rolled under so he walks on the tops of them — on what would be the instep for humans.

At first, Hamlet wore dog booties to protect his feet from painful calluses. But now he’s got some fancy new splints that will help him strengthen his muscles and eventually hold his feet in the right position. It’s a slow process that has to be done carefully, but like everything, Hamlet has taken it in stride. 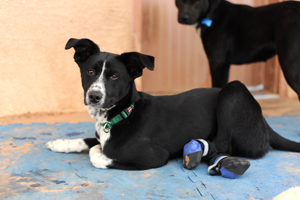 Hamlet wears dog booties to protect his feet from painful cuts and calluses and he gets physical therapy to help him strengthen his muscles. Three times a day, Hamlet’s caregivers stretch and extend his feet into the normal position. The goal is to get them to stay that way permanently, so that Hamlet can walk on the pads of his paws. It’s a slow process, but like everything, the patient puppy has taken it in stride.

In the meantime, Hamlet doesn’t seem to care whether or not he walks like his four-legged friends, because he still gets to do everything they do. Whether it’s playing fetch, going for car rides, snuggling in his caregivers’ laps, or going for walks with volunteers, happy Hamlet doesn’t miss a beat. And, whether or not he ever walks completely normally, he’ll have all the love and support he needs at the Sanctuary to keep stepping confidently.

To bring hope and healing to more animals like Hamlet, become a Best Friends member.