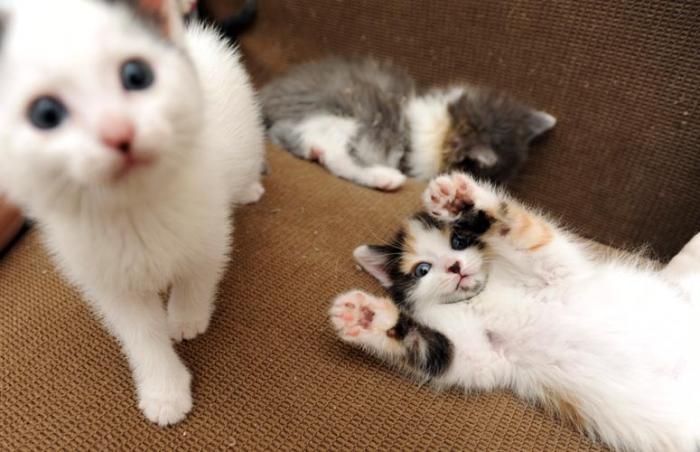 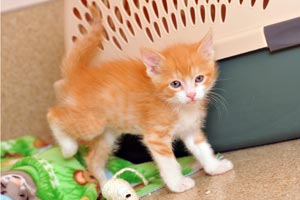 At three days old, Keller was just a tiny, orange ball of fluff, abandoned on the doorstep of a hotel. Completely helpless, the kitten would have been on death’s doorstep, too, had someone not recognized his plight and gotten him to safety.

Not all kittens left alone outside are actually abandoned, according to Janice Dankert, supervisor of Best Friends’ community cat program. Dankert explains that many times, the mother cat is just off trying to find food, or safer place for her kittens, adding that the best chance for newborn kittens’ survival is if they stay with their mother.

So Keller’s rescuer did the right thing and waited to see if the kitten’s mother would return. But after hours passed with no sign of her (and because Keller needed help right away), the rescuer brought Keller to the Sanctuary. After appropriate medical care, he became a Cat World “bottle baby,” because the orphaned, days-old kitten needed to be bottle fed every few hours.

“Keller is the perfect little kitten and a joyful little boy,” says caregiver Barbara Heydolph, while admitting that raising a bottle baby (unweaned kitten) isn’t easy, especially in the beginning when round-the-clock feeding is required every two hours. With Keller staying at Cat World, Barbara could tend to him while she worked and take him home with her at night.

Now growing into a handsome, healthy little cat, Keller is eating on his own. He’ll stay with Barbara until he has his second round of shots, gets neutered, can be safely introduced to other kittens and ultimately find his forever home.

Keller certainly is not the only kitten to come to the Sanctuary needing to be hand-raised. Kitten season, when most felines are born each year, runs from March to October in most of the country, including Utah. During this time, shelters and rescue organizations everywhere are inundated with baby cats and often overwhelmed by their care requirements. That’s why Best Friends started kitten nurseries in Salt Lake City and Los Angeles. However, kittens arrive at the Sanctuary throughout kitten season too.

Frequently, whole litters of kittens are abandoned, which was the case with the Texas city kittens: Dallas, Odessa, Austin and Tex. Dallas, the tiniest one in the litter, was struggling to survive and his littermates also needed help. When they were brought to the Sanctuary, marketing specialist Carrie Smith, who has extensive experience with bottle babies, offered to foster them.

So began a week of intensive bottle-feeding for Odessa (the only girl in the litter) and her brothers. During that time, tiny Dallas grew stronger, and, by the time they were ready to start eating on their own, their personalities had begun to emerge. 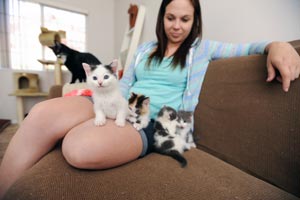 Odessa, a calico, is feisty and self-assured. Tex, with his soft grey and white fur is biggest of the bunch and the most easy-going. Austin, mostly white with two adorable black spots on his head, is the most outgoing and friendly. And the diminutive Dallas, surprisingly, has a huge appetite and pushes his siblings out of way for food.

These four babies are quickly learning to enjoy the mix of kitten formula and wet food (their first introduction to solid food). And at four weeks old, they’re all using the litter box.

Until they’ve been vaccinated, spayed/neutered and are ready for adoption, they’ll live with Carrie. The best news is, once kittens are big enough to be adopted, their irresistible faces surely will help them find homes quickly—their tenuous beginnings in life long since forgotten.