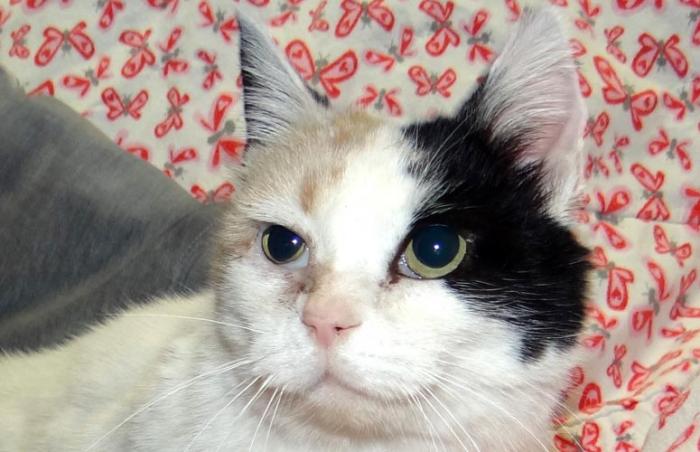 Saffron confounded her caregivers. The pretty white cat with big orange and black patches entered Brown County Humane Society in Nashville, Indiana, as a stray. Saffron had all the right moves to make her a great pet. She is outgoing, friendly and adorable. The cutie delighted shelter staff with her playful antics — zooming from room to room and even playing “keep away” from a dog with his tennis ball. And yet, no one adopted her. After a year and a half at the shelter, she needed a change of luck.

To help more animals in the local area, Brown County Humane Society is part of the Best Friends No More Homeless Pets Network, a program that works with rescue organizations and municipal shelters across the country to end the killing of dogs and cats in our nation’s shelters.

“I love that Best Friends freely shares knowledge,” says Jane Weatherford, board member. “I visited the Sanctuary and was able to talk to experts about fundraising, cat care protocols and dog training. It’s truly like having a ‘best friend’ a phone call or email away to help guide you through uncertainties.”

Marla Browne, No More Homeless Pets Network specialist, was only a phone call away when Brown County needed help. “When I got the call about Saffron, I couldn’t understand why this sweet cat wasn’t already adopted,” says Marla. “There were great videos and images of her, and the shelter was really working a lot of angles to find a loving family.” 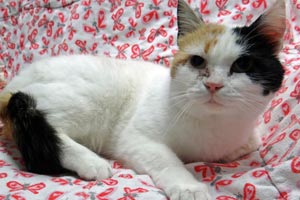 To promote Saffron to a larger geographic radius around Brown County, Marla wrote a Best Friends member message. Member messages are emails sent out to folks who have signed up to receive alerts from Best Friends about animal issues. A month passed, but no one stepped forward to take Saffron home. “It was disappointing, for us and probably for Marla, that no one responded to the email sent to Best Friends supporters. However, just like a ‘best friend,’ Marla didn’t give up,” says Jane.

Strategy to get cat adopted

The shelter staff had promoted Saffron every way they could think of. She was featured on social media, in the local newspaper and in an email alert.

Marla and Jane brainstormed further and came up with a new plan. Best Friends would cover Saffron’s adoption fee and her kennel card would include the Best Friends logo along with information about why Best Friends wants to see her go home.

Lana Palmer had been at the shelter to meet another cat. As she was trying to get that cat’s attention, Saffron reached her paws through the kennel at Lana. Intrigued by her brazenness, Lana read Saffron’s kennel card and was hooked. “Her story was so moving,” says Lana. “I knew she was the one.”

Saffron, now named Miss Prissy, is living it up in her new home. “She’s been so good,” says Lana. “She loves playing with her toys, getting treats and, of course, she loves to get in trouble playing with my mom’s plants.”

Saffron’s success story inspired Brown County Humane Society’s new cat adoption promotion, which features a reduced adoption fee for cats, like Saffron, who have been there a long time.

“It’s just such an exciting time to be involved in animal welfare,” says Jane. ”I’ve never seen the community so cohesive. The only way we are going to stop killing (pets in shelters) is to work together.” It was that spirit of collaboration that led to Saffron’s happy life with her new family.

To help more animals like Saffron go from homeless to home, become a Best Friends member.