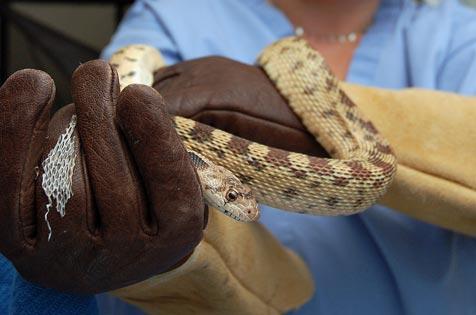 When a bull snake was found a few miles up the road from Best Friends, it appeared he’d had a run-in with somebody with some pretty sharp teeth. He had bite marks up and down his body, and he needed some extra reclusion that he wouldn’t get in the wild, some time away from the demands of the desert and from those in the air that might look down and see him as simply lunch.

Though they aren’t venomous and rarely ever strike, bull snakes get by with a lot of cunning mimicry. Colored tan and splotched with black diamond shapes, they look a lot like their more intimidating and dangerous co-habitants in the desert, the rattler. And from the rattlers, the bulls have adopted a few tricks, one of which is to make that same ominous sound for which the rattler is infamous. But the bull has no rattle, and so instead hisses the alarm. And if that weren’t enough to make you take a step back, they also coil like rattlers, assuming the pose their venomous cousins will take just before the deadly moment.

But this bull snake is now in rehabilitator Carmen Smith’s care, and before slithering back out, will have to be an inch or so shorter. As a result of the predator’s bites, the snake’s blood flow has been impeded, cutting off circulation to the rear tip. After a tiny surgical snip, he’ll be back in perfect shape, albeit a bit shorter than before, and ready to bluff his way out of a hairy situation once more.