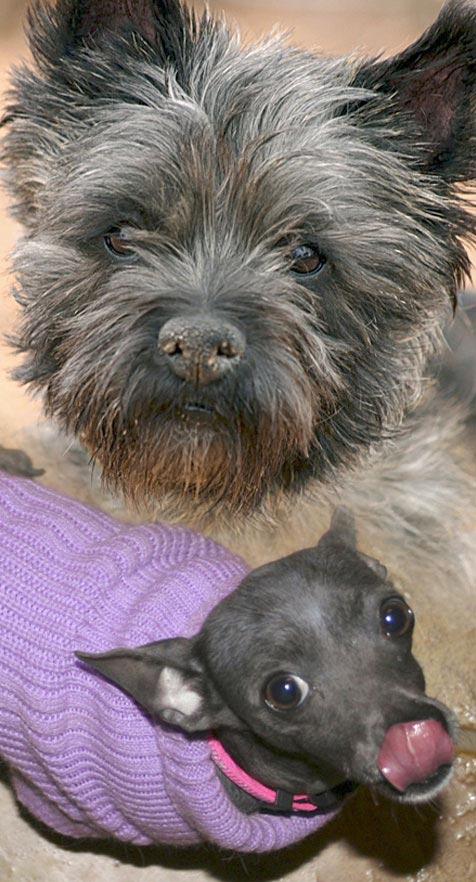 It never fails. When Best Friends staff members become involved in an animal rescue mission, it’s certain that at least a few of them will come home with new four-footed family members.

This time it was animal care director Patty Hegwood and videographer Laurel Anderson who signed on as proud foster moms to, respectively, Madge, the blue Chihuahua, and Snuffles, the cairn terrier.

They were among the 179 dogs that Best Friends rescued from a Virginia puppy mill in October and whisked away to the Pets Alive sanctuary in New York. Almost immediately, nearly all were adopted.

Madge and Snuffles, however, weren’t so lucky.

So they came to Best Friends, where they thought they’d live out the rest of their days, which would have been just fine with them. But Madge struck a special chord with Patty, and Laurel fell in love with Snuffles. Now both dogs are living like fat cats.

Patty’s family already included several cats and dogs. So why another dog? "I have a blue and white Chihuahua named Sugar and she is so sweet," Patty says. "Madge reminded me of her.

"I rescued Sugar from a high-kill facility in Louisiana. She was about to be euthanized because she had heartworm. While Madge wasn’t going to die, I still felt the need to rescue her. And I’m so glad I did."

Like many puppy mill survivors, Madge suffered from physical and psychological problems. The little girl’s breastbone pokes out at an odd angle (though it doesn’t seem to bother her) and she’s still pretty skittish around strangers.

"I think that’s why Madge didn’t get adopted initially," Patty says. "She is painfully shy. And when dogs are that shy, they tend to shriek or bite out of fear. Madge has never attempted to bite, but I have just about lost hearing in one of my ears."

Every day, though, Patty sees progress. Madge now allows Patty’s husband, Jason, to bend down and pet her without screeching. And she enjoys the company of all the animals at the Hegwood home, where she is welcome to stay for as long as it takes to find a forever home.

As for Snuffles (so named because of her asthmatic breathing), Laurel had videotaped the arrival of the puppy mill dogs at Pets Alive. She says, "I had a chance to foster any one of the dogs we filmed coming out of the Virginia puppy-mill rescue."

Laurel had been thinking about adopting a big dog to go running with her. "So how did I end up with this ridiculous and lovable little lady? Must have been something in her eyes." Laurel ended up with a running partner after all. "Snuffles gets an A+ for keeping up with me on the trail," she says.

With continued medical attention, the little dog may one day breathe without sounding like she’s about to sneeze, but her noises don’t bother Laurel at all. On the other hand, Laurel’s three cats dash into hiding as soon as they hear Snuffles coming.

"I think Snuffles would like to play with the cats if they’d let her. But since they don’t, she seems perfectly content to go on long walks and snuggle every chance she gets. Her favorite activity is to go rock climbing up the Squaw Trail here in Kanab."

Laurel has fallen so hard for Snuffles that she’s graduated from foster parent to adopter. "Best of all," Laurel says, "I love watching her when she smiles that toothy dog grin and wiggles with so much joy that she falls over."

Photos of Madge (in sweater) and Snuffles by Patty Hegwood

The Virginia puppy-mill rescue was only possible because of your generous support of the animals.