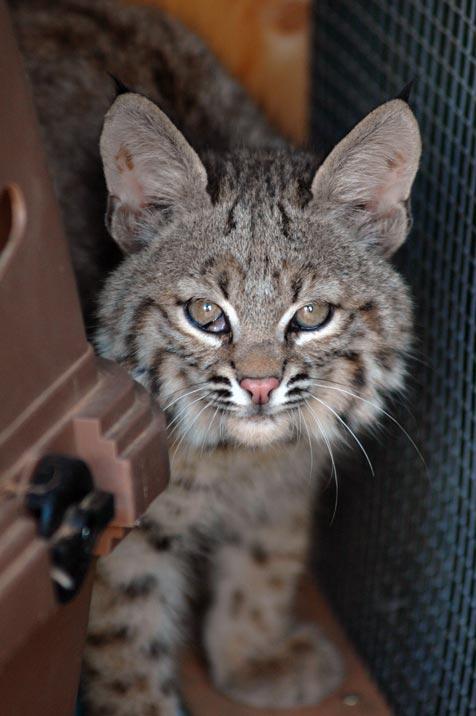 Swept away in a flood, trapped without food or water at the bottom of a canyon, and sprayed by a skunk, a baby bobcat endured a harrowing several days before arriving at Best Friends.

Baby bobcat at bottom of the canyon

Though not yet fully formed, the low, feline rumbling coming from the back of an enclosure at Best Friends is definitely not that of a house cat. The size and shape of garden spades, her ears poke up from behind a crate, and she stares at her rare human visitors with a healthy amount of leeriness. The visitors stay only a short while, because wildlife rehabilitator Carmen Smith wants this trepidation of humans to continue. This is a bobcat, and a very young one at that. The less habituated she becomes to people, the better her chances are of surviving once released back into the wild.

Carmen thinks the bobcat is only two to three months old, and says she was "all bones" when she arrived, weighing four pounds when she should have been between six and seven. Canyoneering guide for Excursions of Escalante, Rick Green discovered the bobcat at the bottom of slot canyon while leading a group of clients through the Grand Staircase-Escalante National Monument in early July.

Saving animals from dying in monsoons

July through October is monsoon season in the Southwest. Though the rains are short, they’re torrential. Flash floods sweep through the canyons, frequently taking animals with them into spots they’re unable to climb out of.

"I can’t stand the thought of animals dying that way," Rick says, "so I get them out." Using ropes, bags, and whatever other equipment he has on him, he’s pulled deer, hawks, pack rats, and even rattle snakes and skunks out of the waters and onto the canyon rims. This time, he was certain it was going to be a skunk, because that’s all he could smell upon entering the canyon.

"A quarter mile of the canyon was just dimpled with footprints, going back and forth," he says. When Rick reached the end of the canyon, he did not come upon a skunk, but a much less malodorous creature—a baby bobcat. She was backed up against the cliff wall, reeking, however, of skunk juice.

"I came up on her real slow, and she was real docile. Her ears were back and relaxed, and she was just looking at me in a real casual way. But when I reached out for her…oh boy, it was a different story then." Before dashing into a crack in the cliff, the bobcat let Rick know, quite vocally, that she was no kitty.

Rick decided at that point he would call Carmen to see if Best Friends had a place for her. After securing permission from the Utah Division of Wildlife, Carmen gave him the go ahead.

Having left the cat some food and water, Rick spent the night above the canyon with his clients, and announced the next morning there was a change of plans. "Folks," he told them, "we’re going to do an animal rescue today." No one had any objections.

After repelling back into the canyon, Rick found the bobcat lodged about ten feet inside a crack in the cliff. He converted a tent pole into a catch pole, and encountering little resistance, Rick very carefully pulled the cat out of the rock and placed her in his backpack. Perhaps too weak to put up a fight or knowing she was bound for safe keeping, the bobcat allowed Rick to carry her up the canyon and three miles to the car without uttering a peep.

When the bobcat arrived at Best Friends, she was too weak to eat on her own. So Carmen and sub-permittee Barbara Weider nourished her intravenously. They also had to apply ointment to one of her eyes. A Nictitating membrane—a third, clear eyelid that many animals have to provide moisture to the eye without blocking visibility—was fixed.

Eyes alert, weight as it should be, and fur healthy and gleaming, the bobcat is now in fine shape, and the very first occupant of the sanctuary’s brand new run for large cats. It’s a long, spacious enclosure on the periphery of the sanctuary, well removed from dog barks and from human and auto traffic. Cameras placed around the run and around-the-clock video recordings allow Carmen and Barbara to remain afar and still keep an eye on her. Once they can be sure she can fend for herself, which probably won’t be for several months, the bobcat will be out tromping Utah’s red rock desert, no doubt wise now to floods and skunks.