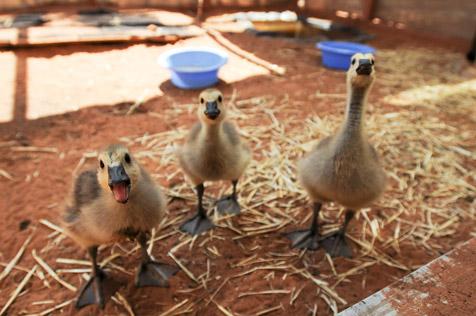 Caring for a Canada geese gosling trio and a wood pewee

Three two-week-old goslings, fluffy and a bit wobbly, were dropped off early in May at the animal shelter in St. George, Utah. They'd been found in someone's yard without their mom or dad; and, encircled by some energetic dogs, they were already in a tight spot.

Saved by a kind rescuer, they were dropped off at the St. George shelter, then driven two hours to Wild Friends at Best Friends. (Canada geese are wildlife, and any orphans need to be in the capable hands of a wildlife rehabilitator.) 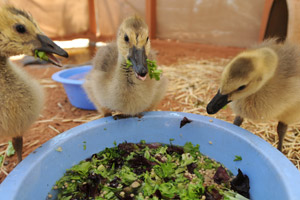 The young goslings get a snack.

They gobbled down spring mix and other greens, but it took them a couple of days to figure out what pellets were. Pellets are a healthy bird diet, which looked a little odd to them at first, but they soon got the hang of it.

They graduated from water bowls to their own specially designed pool, with sloping sides and places to get in and out, good for lots of splashing and sunbathing.

Wildlife rehabilitators take care to ensure that orphaned wildlife don't become tame, so they'll have the skills to survive, and find friends and a mate out in the wild.

Joining their friends in the wild 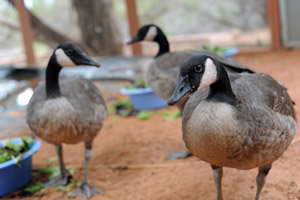 Soon the Utah Division of Wildlife Resources will be driving the three goslings, now grown up, to a lake on the migratory path of thousands of Canada geese and snow geese.

They'll settle into life as wild geese, and in a month or so will fly south with the others on their first migration.

At the opposite end of the scale, size-wise, is a tiny Western wood pewee, one of a couple hundred wild patients who've been cared for by Wild Friends so far this year.

He was found in Utah, on Cedar Mountain, near Aspen Mirror Lake, by a family on a hike. It had been raining, and the little bird was stuck on a rock in the middle of a creek, looking bedraggled and wet. Fledglings are teenagers, and sometimes they don't quite know how to get along in the world and could use a little extra help.

When the kind people brought him to Best Friends on August 2, he was really thin. Young fledglings are still being fed by their parents, but perhaps he'd become separated from his parents. He certainly hadn't been getting enough to eat.

The Wild Friends staff hand-fed him at first. Within three days, he was stronger and eating on his own. They added a special tonic for insectivores to his diet, and then he began to put on weight.

Food for a little bird

Now, when food is put in front of him, he picks up a tidbit and flies around with it in his beak before swallowing it, as if to announce to everyone, "Hey, look what I caught, all by myself!" Then he swallows it, and lands on a perch, looking very proud of himself.

Insectivores often catch insects by the wing, so this is his way of demonstrating that he can catch food while in flight.

Wood pewees also hover, as they look for their dinner along the bark of trees. He hovers beautifully, and will soon be back in his native habitat again, ready to fly south and return in the spring.