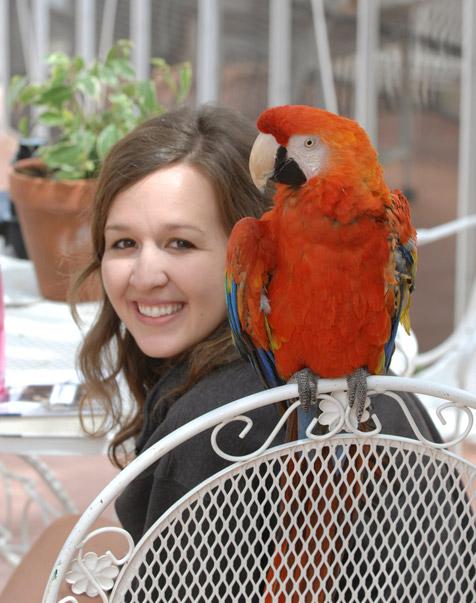 Caring for parrots rescued from a bird mill

Being sent to the corner of a room is no fun for anyone. However, the experience could go from bad to worse if the ceiling were so low you had to stoop over the whole time. For a large breed parrot, that’s about how it feels to stand on a perch too close to a corner, too low to the ground, or too high to the ceiling.

Unless you know enough about parrots and how to help them feel comfortable, mistakes like poor perch placement are easy to make. As it turns out, for the 136 parrots seized from a bird mill in Tennessee, they were lucky to have a former Best Friends intern going to bat for them. A former intern who, as it turns out, knew a lot more than she thought about how to help parrots be happy. 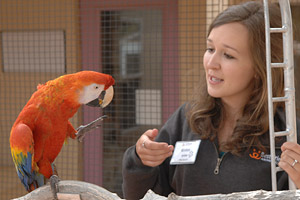 Perhaps you remember Kirsten Floyd, an intern who spent six weeks at Best Friends not long ago (then Kirsten Ayers). When Kirsten first came to the Sanctuary, she admitted to having a genuine phobia regarding birds. Still, she was drawn to them right from the start — especially to a macaw named Boo. During her six weeks at Best Friends, Kirsten went from parrot illiterate to parrot savvy. Little did she know how soon those skills would be put to the test.

At home in Tennessee, Kirsten works with Agape Animal Rescue, a dog rescue well known in the area for their dedication to the dogs who come into their care. The rescue may be relatively small, explains Kirsten, but they have a reputation for doing things right.

Helping the rescued birds from the bird mill

When authorities stepped in to seize the birds in the bird mill — 136 parrots and other animals living in awful conditions — they needed volunteers with parrot experience. Authorities contacted Agape looking for volunteers, which is how Kirsten became involved. She’d had the parrot internship at Best Friends, and wanted to pitch in.

The thing is, she probably didn’t count on being one of the main parrot experts on hand. "I was in shock that I knew so much more than I thought!" says Kristen. "I owe a lot to Best Friends." Kirsten said a funny thing happened right away. Pretty much every question she’d asked during her first week at Best Friends came up in the beginning, only this time around she was the one giving the answers.

Temporary shelter for birds in need

Kirsten’s first task was to help set up the temporary shelter where the birds would stay after being pulled from the property. She wasn’t certified to enter the actual bird mill, but she did all she could to make sure the parrots had a happy landing once they arrived. These were birds who’d been living in unimaginable filth, deprived of having even their most basic needs met. Some were literally starving to death. Kirsten, and the others at the temporary shelter, wanted to make sure these parrots received the very best care from the outset.

Here’s where some of her background at Best Friends began to kick in, even before the birds arrived. Kirsten noticed some of the perches in the cages were too close to a corner, too low to the ground or high to the ceiling. A perch that’s too low, for example, will be uncomfortable if the parrot’s tail feathers scrape the bottom of the cage. She helped rearrange the perches, food and water bowls, and more.

At Best Friends, Kirsten learned all manner of tips and tricks about how to keep a bird feeling safe and happy. "There were a ton of little things that I learned about parrot care," explains Kirsten. Each one of those tidbits went to good use as she answered questions and provided direction to the volunteers on hand, many of whom had little or no experience with parrots.

Caring for and socializing birds

When the birds arrived, Kirsten was the go-to gal once again, helping to socialize and care for the parrots any way she could. Some of the birds were sick and couldn’t eat on their own, so Kirsten fed them by hand (many of the other volunteers were uncomfortable doing this).

As well, several of the healthy birds needed to be hand-fed at first. "Some of them were scared of their food bowls," says Kirsten. Back where they’d been living, the bowls were disgusting, often filled with feces and other filth. It’s going to take a bit of coaxing to teach these birds there’s a better life than what they’ve known so far.

"I was just trying to get them out of their shell," she says. Kirsten hand-fed the parrots, cleaned their cages, set up toys and other enrichment activities, and did whatever she could to make their lives better. She also played with and socialized the birds, often from a distance, sometimes up close if they allowed. One cockatoo in particular caught her attention right away.

One way or another, this bird managed to rise above his circumstances and still wanted to interact with people. "He was actually dancing right when we brought him in," explains Kirsten. She spent quite a bit of time helping him, socializing, hand-feeding, saying "hi" back to him whenever she’d walk by (this bird always said "hello" to Kirsten).

Eventually, she tried petting him. As an FYI, cockatoos have extremely powerful beaks, powerful enough to crack almonds without straining. Yet Kirsten knew enough about birds to read his body language, and felt confident he wanted to connect with somebody. So she reached out and petted him. This attention-starved bird soaked up every minute, even twisting his head upside down to encourage more scratches. "You could tell he just loved it," says Kirsten.

Continuing her work with animals and parrots

Kirsten spent four different days volunteering with these parrots before they moved off to other rescues. During those four days, she was able to make a big difference in their lives, no matter how brief their time together. "It was awesome," she says about the experience. From here on out, Kirsten intends to find a way to work with parrots and continue to help them. A mighty change of heart indeed, considering only a couple short months ago she was afraid to go near a parrot. "I owe it all to Best Friends," she says. Kirsten has also found a way to continue her work in animal welfare: She has accepted a full-time position with Agape Animal Rescue!

Do you want to help animals?

Learn from the best! Best Friends Animal Society has many ways to help you further your education in animal welfare. From the Learning Experience (where internships are available) to the Best Friends workshops (where you can learn everything from How to Start an Animal Sanctuary to Equine Sanctuary Basics), there's something for everyone who wants to help save lives. There are also many volunteer opportunities through Best Friends.