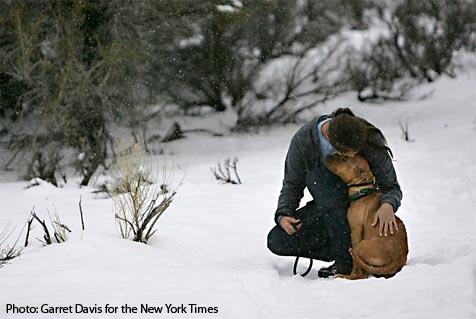 It was one of the photos that accompanied a Feb. 2, 2008, front-page story in the New York Times about the dogs rescued from NFL quarterback Michael Vick’s dogfighting ring.

No doubt most readers were deeply touched by the photo that showed Mckenzie Garcia, a dog caregiver at Best Friends, kneeling in the snow with Squeaker, one of 22 of the most challenged Vick dogs who came to Best Friends back in January 2008 for sanctuary and healing.

Cartoonist Berkeley Breathed of "Bloom County" and "Opus" fame was moved by the photo, too — so moved that the photo inspired him to write his first novel, "Flawed Dogs: The Shocking Raid on Westminster."

"The book happened because I came across both a picture and quote at about the same time — a picture of one of Michael Vick’s fight dogs," Berkeley said in an interview on the CNN website. "It was set to be put down, but a shelter in Utah decided to take the dog and a few others at the same time and try to rehabilitate them. …

"This was the first time the dog had ever received any affection in its life. … It’s the most moving picture of a dog I’ve ever seen, having gone through an impossible transition and fallen back to where dogs naturally go, which is just loving people."

Garcia remembers well the day that photo was snapped.

"It was the crazy media day — people and cameras everywhere," Garcia says. "I was asked by someone if I could walk one of the dogs, and Squeaker was my first choice. We started to head out and she was starting to get a little freaked that there were people following us, so I squatted down to comfort her. She kept inching closer and closer and we stayed like that for a little while."

Breathed spoke more about the novel, "Flawed Dogs," and the photo that inspired him to an audience at the Long Beach Comic Con, a convention in Long Beach, California.

"There is a photograph that has been on the top of my computer that was my daily inspiration of what this is all about," Breathed said in an article on comicbookresources.com. "This is a picture of one of Michael Vick's fighting dogs. This is the moment when he, for the very first time in this dog's life, faced only with hate and cruelty that you and I can't imagine, this is where he is receiving [kindness] for the first time, and he's becoming a dog again. And for a storyteller, this is like the bicycle in the tree. This is what we live for. This is what I live for."

Breathed said the quote that inspired him is a couple hundred years old.

"‘All animals dream, only dogs dream of us,’ and that is a theme for a book," he told a noticeably choked up audience at the convention, according to the story on the Comic Book Resources website.

Breathed and his wife, Jody, have a number of rescued dogs, including a pit bull named Pickles. According to the CNN story, Breathed’s "affection and concern for dogs form the heart of ‘Flawed Dogs: The Shocking Raid on Westminster,’ Breathed’s new illustrated novel, whose hero is a resilient dachshund with a soup ladle for a leg."

As for Squeaker, the dog featured in that inspirational New York Times photo, she’s doing great.

"Today, Squeaker is living in the land of beds and blankets also known as the laundry room at Dogtown headquarters," Garcia says. "She's very happy and comes out to say ‘hi’ whenever she hears my voice. I am one of the nighttime walkers for the clinic so I’m able to take her out for a short walk at night. She's super sweet and still loves to cuddle with me when I crouch down to her level."

Pit Bulls: Saving America’s Dogs is one of four Best Friends campaigns aimed at reaching the goal of No More Homeless Pets. Read more about the campaign here.

As part of Best Friends’ 25th anniversary in 2009, our goal is to double our membership, so we can double our efforts to bring about a time when all companion animals have a forever home. What can you do to help? Give the Gift of a Best Friends membership to family and friends.

Above image appeared in the New York Times/Garrett Davis