With his shiny black fur and curling white whiskers, Duke is a handsome and distinguished-looking cat. But he hasn't always led such a dignified life. He was once called Flopsy, perhaps after the character in "The Tale of Peter Rabbit," or perhaps because he used to have such a hard time walking that he would often flop over onto his side.

The unsteadiness and lack of motor coordination Duke experiences is due to a neurological condition called cerebellar hypoplasia (CH), in which the part of the brain that controls motor function, the cerebellum, does not fully develop. Cats with CH, sometimes called "wobbly" cats, are born that way, usually as a result of the mother cat contracting distemper or parvovirus while she is pregnant.

Not only did Duke's special challenges begin very early in life, but his first year was doubly tough because he was living as a stray. Luckily, he found refuge with an elderly woman who rescued him from the streets along with four other cats. The other cats did not have CH and quickly found good homes. But nobody offered to adopt poor Duke, who could barely stand up long enough to relieve himself. Because his benefactor was having difficulty caring for herself, nevermind a special-needs cat, Duke came to Best Friends Animal Sanctuary. 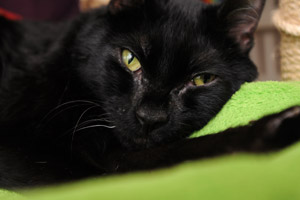 When he first moved to Cat World, Duke couldn't get around very well. He had trouble using the litter box, and he often fell over and yowled so loudly that his caregivers thought he was injuring himself. Although most cats with CH can and do lead happy and pain-free lives, Duke seemed uncomfortable and frustrated with his severe physical limitations. As a result, he was grumpy, and often did not want to be bothered with people or other cats, even if they were helping him or keeping him company.

So the veterinarians at Best Friends put Duke on a medicine that helps to ease neuropathic pain. At first, they weren't sure how much it would help him, but Duke's life was about to change. Caregiver Felicia Decker has seen Duke's progress firsthand, and she describes his transformation. Though he'll never have a normal gait, Duke can now move with relative ease around the lobby in Quincy House, the area of Cat World he calls home. And, while Felicia and his other caregivers still give him regular baths, Duke is now able to clean his own body for perhaps the first time in his life.

Better quality of life for a cat

The improvements in Duke's physical condition have lifted his spirits tremendously. Despite the fact that his condition isn't curable, he's now enjoying a much better quality of life. And, because he no longer finds his daily activities so frustrating, he has become much more sociable and friendly. In fact, he's gone from being a standoffish cat to a big love bug who will purr instantly when petted. His attitude toward other cats has improved as well; he'll even try to play and cuddle with them when he's feeling especially good. Felicia says he is not only a great cat, but also an inspiration because he keeps trying to do as much as he physically can. It just goes to show what proper veterinary care, a whole lot of love, and the right attitude can do.

Adopt a cat from the Sanctuary.