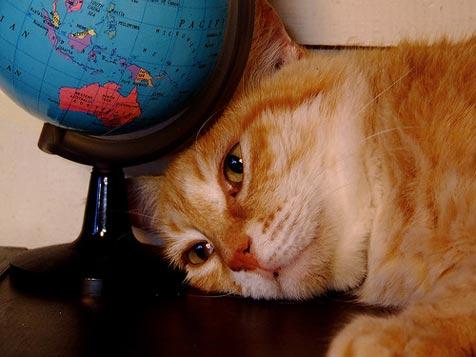 It took place late at night. All the cats at Best Friends grouped together for a clandestine meeting once all the people had gone home. "It’s an outrage!" one cat yelled. "I won’t stand for it!" another huffed. The usually docile cats at the sanctuary were up in paws about a most critical matter and it would be a long, restless night for all until some type of corrective plan was set in motion.

The problem? The humans at Best Friends were about to pick the wrong name for the cat part of Best Friends Animal Sanctuary. Dogs already had "Dogtown," horses had "Horse Haven," and so forth. The cat area name had changed several times over the years, but "Kittyville" was the name currently in favor.

"I’m no kitty!" one older, dignified calico exclaimed. "The very idea is preposterous!"

And so the discussion continued as the hours dragged by slowly. Clearly, any name with the word "kitty" in it was not going to fly. That idea had to be crushed and ground underfoot. But what to propose in its place?

All of a sudden, it dawned on them. Not only were there rumors that these cats were plotting someday to rule the world, but these were cats who also hailed from all around the world! (Persians, Siamese, Abyssinians …) The choice seemed obvious: Cat World!

And so, tragedy averted, all the cats left the secret gathering feeling much happier. They wouldn’t need to press the red button after all. The only remaining detail was to convince the people to go with the new name they had selected. Child’s play: a few rubs, a few well-placed purrs, a scribbled note slipped to the humans, and the name stuck. Cat World is now official! Stop on by and meet the feline masterminds behind the plan, but make sure you treat them nicely. They have connections you can only imagine …

Find out about Cat World at Best Friends